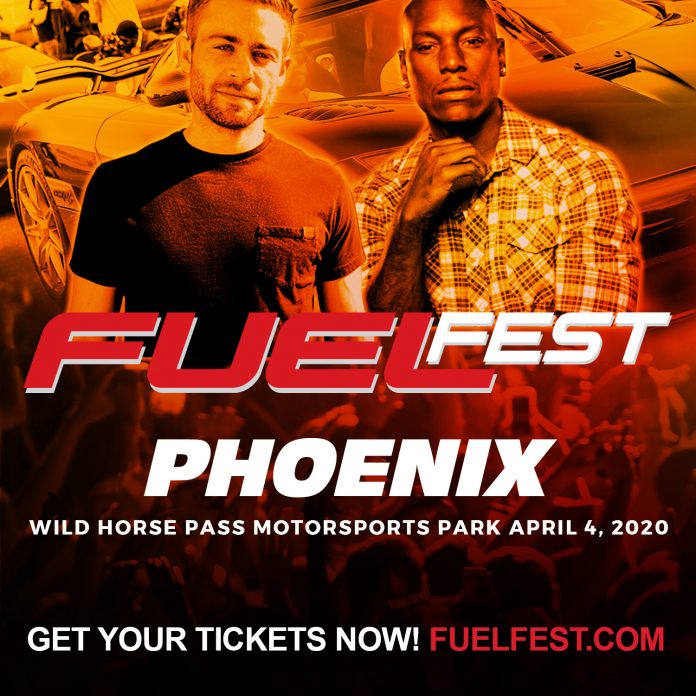 FuelFest is set for its inaugural event in Arizona at Wild Horse Pass Motorsports Park on Saturday, April 4, in Chandler. Now in its second year, FuelFest blends the enthusiast’s passion for the automotive world with celebrities, live music, food, drinks and art. The show features top custom, exotic, rare, and exclusive cars & trucks. Also, for the first time ever, spectators and fans can enter their own vehicles for drag racing and drifting. A portion of the proceeds benefits Reach Out WorldWide (ROWW), the non-profit charity founded by Paul Walker. The organization was founded in 2010 by the late actor/producer after a massive earthquake devastated Haiti and Walker was inspired to organize a relief team that responded to the disaster. ROWW’s mission is to fill the gap between the availability of skilled resources in post-disaster situations.

Cars & trucks will be showcased throughout the venue and track at Wild Horse Pass Motorsports Park located at 20000 S. Maricopa Road. Fans can expect an unforgettable experience with appearances from “Fast and Furious” franchise favorites Cody Walker and Tyrese Gibson.

“We’re so excited to start the year off in Phoenix! We had to come to Arizona, the valley has such a diverse car community and has always been so supportive of Reach Out WorldWide, it’s the perfect setting for FuelFest! This year we’re ramping up the live action entertainment with drag racing, drift shows, live music, and guest appearances. Get your tickets now – I’ll see you on April 4th!” says FuelFest co-founder Cody Walker, who is also an avid driver of all things fun both on and off the racetrack.

FuelFest brings the passion of the automotive community to major cities across the globe, showcasing an eclectic collection of cars and music, creating an everlasting experience that will leave fans looking forward to the next event.

“FuelFest dominated 2018 & 2019 when we took over LA and the UK with over 25,000 fans showing up to support,” said special guest, Gibson . “2020 is coming with more energy. FuelFest Phoenix April 4 is gonna be unbelievable. I’m bringing special guests and you should too. You don’t want to miss this. We got cars, music and racing. You asked for it, Arizona. Here we come!”

“Our vision for FuelFest is to create an experience that appeals to everyone from the teen buying his or her ﬁrst car to the collector building a bigger garage,” said Chris Lee, FuelFest co-founder. “With jaw-dropping sponsor showcases, live over-the-top entertainment and, of course, an incredible display of cars, FuelFest will leave a lasting impression.”

Along with interactive exhibits, music, food and a VIP lounge, fans are invited to register to put their own vehicles on display or to participate in the test & tune drag racing & drift shows slated to take place all day. Those wishing to enter their cars, can register early with discounted pricing that includes an extra ticket for a passenger. Early Bird is selling quickly!

Gates open to the public from 10 a.m. to 4 p.m. on April 4. Event information, car registration and tickets can be found at www.FuelFest.com, as well as on social media channels, including Facebook, Instagram and Twitter.