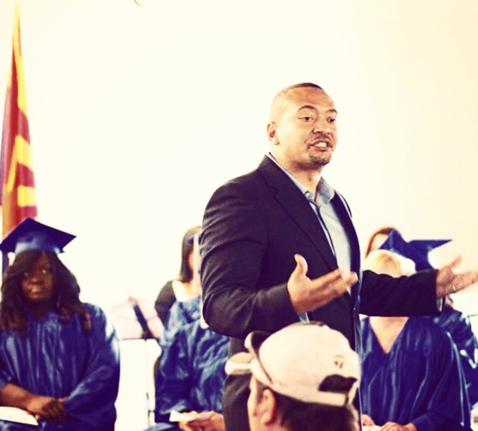 Prison is 97% managing boredom, the other three percent is either spent outside, or if you’re lucky, at a job. For those in, it is a waiting game, waiting for the next meal, bed time, release, etc.

This was the hardest part of prison for Frantz Beasley. He sees it as a waste of resources and productivity. He was in prison twice, once at 19 and the second time a couple years later, both for armed robbery.

He spent a total of 14 years in prison. The second time he was in, was when he decided to change his life. Some people don’t know what day and time they had their defining moment, but he does. It was September 11, 2001. A day that was a nightmare for America turned into his saving grace.

He recalls watching the attacks on T.V. and seeing so many people rush in to save others. Something that he knew he wouldn’t do himself.

Beasley grew up in South Phoenix, where drugs and violence were rampant and it didn’t take long for him to get involved in crime.  He was first “popped”, as he put it, at 19 and after he was released, he was arrested again quickly after falling back into crime.

“I was born in violence, and violence doesn’t bother me.” Beasley said, “You just get so used to seeing it. And it was like ‘okay well the country got attacked so that means we’re going to attack someone else.’ What bothered me about September 11th was how average everyday people… everyday people running into buildings and pulling people out and pulling together. What I realized at the time is, I wasn’t anything like that.”

He had this life-altering realization in 2001, but the earliest he could be released was in 2009. For some, this would be discouraging, but for Beasley, he saw this as eight years for improvement.

“I looked at prison as a privilege, I didn’t look at it as a curse anymore. I said ‘I got eight years to look at, not just what’s wrong, but why I keep making these damaging decisions.’” He said, “I also have eight years to figure out what is my next step.” 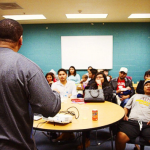 He decided he wanted to become a victim’s advocate, so he signed up for classes. He hit a roadblock when he was told that nobody would ever let him advocate for others due to his history.

He didn’t see that as the end, but more of an obstacle to overcome. He continued classes and decided to start his own organization when he was released on parole.

AZ Common Ground’s Facebook is a testament that the hard work put in, the reviews and comments are all flooded with positive sentiments.

“This organization has given me a new purpose and an opportunity to help re-build lives.” One Facebook user, Kevin Smith said.

Just recently AZ Common Ground held a march to help end child sex trafficking. Beasley helped ease tensions between marchers and bystanders, even taking time to give out his card to help a man who said he was recently released from prison. 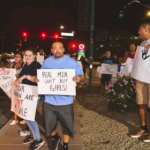 Fellow march goer Olivia Junior said of the interaction, “He [Beasley] diffused a situation where a man approached the group aggressively, Frantz pulled him away from us and spoke to him, a few minutes later the man explained he was concerned for our safety.”

Junior connected with Beasley a few years ago after discovering AZ Common Ground on Facebook and was amazed by the connection that Beasley had with the community.

“Frantz is a man who does his research of what tugs at his heart.” She said, “He is very confident on his ideas on how he will present it to the community.”

For Beasley, it is all about leading by example. He is the father of four kids, and was estranged from them while he was serving time.

“It gives me a purpose for going into the office every day.” He said, “When I look at my children, I realize there is a humongous responsibility to set a phenomal example for them.  One of the dreams I use to have while I was in prison, whatever I become, or whatever my relationship was with them in the future, when they catch up to me, if they research their father, I just want them to be proud of the man that is. They became my driving force for me” 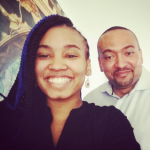 “I always think about them, I try to be responsible with things that I say.” He said, “If they ever look me up, I want them to be able to say ‘I hope I had a part in that story’ I try to be socially responsible, because I know that my children are watching and the people who I victimized are watching. There is not a day that I don’t think about my victims and I don’t take them with me.”