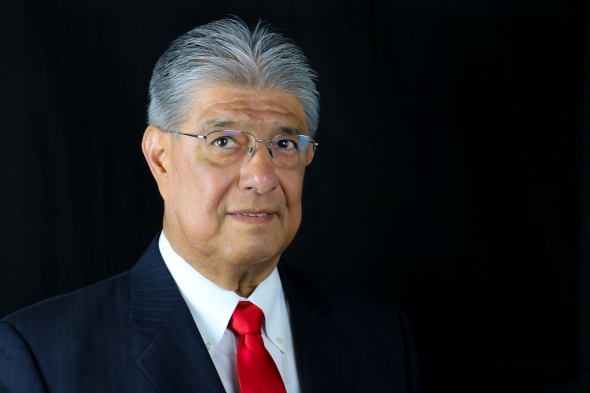 Interview and photograph by Eduardo Barraza

(Gilbert, Arizona) – As Gilbert High School is nearing the celebration of its 100th graduating class this year, there is a man who remembers a time when this massive educational complex was only a vacant land and an architectural layout on blueprints.

The man is Dr. J. Charles Santa Cruz, who led Gilbert High as principal for 20 years.

Santa Cruz began working for Gilbert Public Schools as an administrator in 1981, as the assistant principal of Gilbert High. At that time, the school occupied space in the current Mesquite Junior High School campus.

He started his career in 1974 as an English teacher with the Tempe Union High School District.

The retired educator currently serves as a member of the Gilbert Public Schools Governing Board since 2015.

Santa Cruz joined the school district at a pivotal time, when the Town of Gilbert was beginning to experience what would become the greatest growth in its history.

He said growth wasn’t really exploding yet, but town residents could see it coming because urban developers were working in the area.

“The community was starting to take a look at growth. We could see land being termed, and homes starting to take shape,” said the long-time educator, who earned his doctorate degree at Arizona State University in 2002.

A year after joining Gilbert Public Schools, Superintendent Walter Delecki tapped Santa Cruz to take the helm of Gilbert Junior as principal, a position he’d hold for a decade.

For Santa Cruz this was a time of professional growth, while for the district, infrastructural expansion and academic development were just ahead in the horizon.

“During that time we built the concept that is still being used by the district today, known as interdisciplinary teaming at the junior high school level,” he said. “We created management and organizational structures that really weren’t in existence in that location at that time.”

In 1992, Santa Cruz returned to Gilbert High, this time as principal. He’d stay in that position until his retirement in 2012.

While Santa Cruz was still leading Gilbert Junior High during the mid-80s, the demand for growth led Gilbert Public Schools to begin thinking about building more schools, including a larger facility to house Gilbert High.

Between 1981 and 1989, the school district built eight new school buildings, including six elementary schools, one junior high and one high school.

Santa Cruz remembers the ambitious construction plans for what would become the current Gilbert High campus.

“This was the first building, the first educational facility in the district that I am aware of that was built with educational specifications and actual input from representatives in every discipline of the school,” he said. “Teachers, the community and administrators had an opportunity to participate in its design.”

According to Santa Cruz, important educational elements such as Career and Technical Education for the new school received careful and thoughtful planning.

He recalls that members of the school board at that time were very concerned about the performing arts for the new building. Therefore, the auditorium took a long time to refine and construct.

“We brought in an acoustics specialist and all kinds of consultants to make sure we had the very best auditorium facility that we could afford at the time,” said Santa Cruz.

The auditorium was not the only section of the new building that underwent extensive planning; the entire complex took much preparation. In fact, the new high school was built in phases.

“Very few people probably remember that,” said Santa Cruz. “The wing that houses where the current administration office is and the auditorium was the last phase built. It was perhaps a couple of years after the initial opening of the school that we actually had that building completed.”

As Santa Cruz reflects on the huge construction project that became the new Gilbert High campus, he said it was the result of a great collaborative effort.

“It was one of the first times we brought in consultants from universities and experts in facilities planning,” he said. “I remember being part of that with the superintendent, and having a discussion about that. Even though I was at that time principal of Gilbert Junior High, and not really directly associated with Gilbert High, I still feel that I had a part in offering some constructive commentary about the new building.”

Santa Cruz said that when the new facility opened in 1986, it was a great point of pride for the Town of Gilbert, because the concept of interior space and a commercial mall.

“A lot of folks thought it was going to be a mall in the community, because of the way of the structure,” said Santa Cruz. “It was a big facility. People were concerned how student interaction would manifest itself, so we had management systems in place.”

Santa Cruz said there were a lot of growing pains in the community when Gilbert High was under construction. In fact, between 1981 and 2011, Gilbert Public Schools added a total of 36 new educational facilities.

“There were some years that we built two schools a year,” he remembers. “We were always looking for land.”

In 1987, the school district added Islands Elementary and Houston Elementary, and in 1988, Mesquite Junior High and Burk Elementary became part of the infrastructural grid.

He said a great deal of time was also devoted to developing a curriculum plan, and a design for schools during the 80s. But academic and structural growth also meant a need to tap into new, intimidating technology.

Santa Cruz said that since the early 80s, technology was starting to creep in the educational structure, which caused concern and anxiety among educators.

“This was the time of the Apple II,” he said. “As professional educators we wanted to jump into that arena, but they took us all kicking and screaming to the technology world. Technology evolved so quickly that it wasn’t that long that it became very user-friendly. We reached a point where we determined that we couldn’t live without it.”

The growth in the district mirrored the town’s demographic expansion. From 1980 to 1990, the population grew from 5,700 to nearly 30,000 people. Last year, Gilbert’s population count was reaching 248,000 inhabitants.

When Gilbert High’s Class of 2017 graduates in May, the school will have reached an important landmark: one hundred graduating classes.

For Santa Cruz, the meaning of this takes him well beyond the three decades he spent with Gilbert Public Schools.

“I think we have set a tremendously strong foundation since the school was established through the decades to make it central to the lives of the young people in this community,” said Santa Cruz. “A lot of that was done through family support and the involvement of founding families, and families that were participating in the educational structure through each of those decades.”

He envisions Gilbert High’s educational success to continue beyond the decades, and for the next 100 years.

“I don’t see educators currently involved in the enterprise resting on their laurels. They’re innovating and looking for ways to make education more accessible for kids, more stimulating and enjoyable for those involved.”

For the retired administrator and educator, one hundred graduating classes is the result of a number of factors.

“I congratulate the District for sustaining an educational institution for 100 years. It exists because the community has supported it, because educators and educational staff have dedicated themselves to nurture it and build it. It has sustained itself because students have looked forward to the day when they will be able to call themselves ‘Gilbert High School Tigers,’ and make their contribution to the legacy that is Gilbert High School.”

At the intersection of Gilbert High’s past and present and with 40 years in education, Santa Cruz knows the future will bring new demands and challenges for school administrators, students and families. He says continued success rests on the ability to respond to them.

“At the same time, it is the 21st century. We need to make sure that we do what is necessary to sustain Gilbert High School as a viable and dynamic educational entity through the next 100 years.”