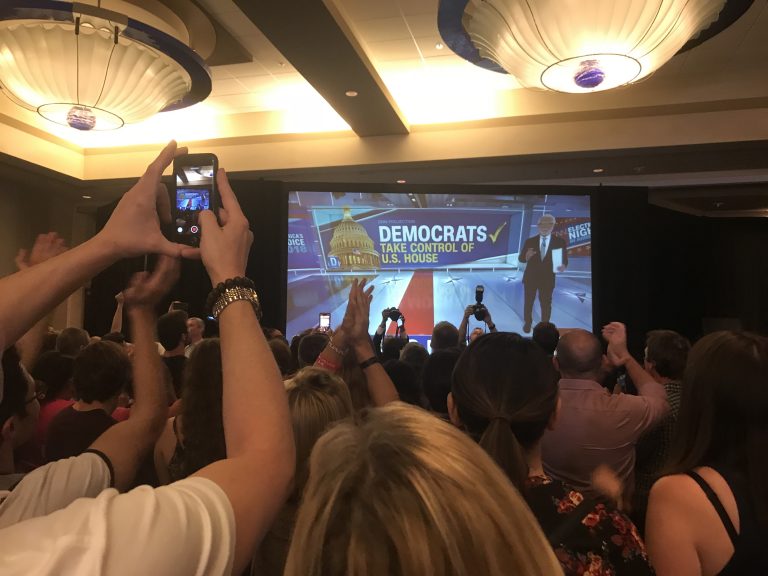 Over the past two years, Americans expressed their frustration for the political turmoil on both sides the isle. However, the midterm elections seem to come with a silver lining; people are more engaged with democracy they have ever have been before.

In the front of the AZ Democrat’s election watch party stands a father-daughter-duo among the crowd, who watch with wide eyes as the election results roll in on the big screen televisions. Richard and Al Lavallee are Rhode Island natives that previously lived in San Francisco, and now have resided in Glendale, Arizona for two years and half years.

“[Arizona is] a little more conservative than I’m accustomed to, compared to Rhode Island and San Francisco,” said Richard.

“The Trump administration itself has spurred me into action, I try to [do] as much as I [can.] I’m very happy to canvas and phone bank. I used to feel hopeless and desperate, I felt like I wasn’t doing enough so that certainly got me to take a bigger part than I would have originally,” said Al, who interned for Dr. Hiral Tipirneni, a democratic candidate in Arizona’s 8th congressional district,for the past several months. She also highlights education as another important factor in her activism.

“Education is something I’m concerned about, but more for the well-being of my teachers than myself. I’m very sad to see my teachers have to struggle so much, even though they care more than half the people I know about our well-being and education, and they get nothing for it,” said Al.

“We were part of [the #RedforEd] protests in the summer time, in favor of the teachers. We also went to the Women’s March and the March for Our Lives. I think it’s actually been a positive thing that Republicans have spurred a lot of interest in the opposition, and so it’s gotten a lot of Democrats out, a lot of women out to try and turn things around,” Richard adds. He also has volunteered for Tipirneni’s campaign along with his daughter. Together, they started with phone banking, and then expanded to knocking on doors.

“One time, we were accidently sent to the house of a Republican,” explained Richard,” so instead of letting him dismiss me, I said, ‘Well, what issues are you interested in?” The man spoke to Richard and Al about which candidate best suited the man’s positions on healthcare and social security. At the end of their conversation, the man asked for a pamphlet on Dr.Tipirneni, which surprised both Richard and Al.  “[I think] I may have persuaded him to change his point of view,” said Richard.

Both Al and Richard agreed that they want to see the politics change in Arizona.  “I would like to see, within the state, the Democrats take over for the first time in a long, long time because I think the Republicans in office have not really been working for the sake of the people. We want to emphasize things that are good for people, for climate, for weather and less so about some profits of some small groups of people,” Richard adds.

In the back corner of the watch party stands Kathleen Raif, a Phoenix resident and long-time Democratic voter. As nurse practitioner, healthcare is a key issue for her in the election and shares her frustration with the politics and misconceptions surrounding healthcare.

“I’ve worked with emergency and open-heart surgery patients, and before Obamacare, some people had no insurance for their healthcare and having that surgery was really a struggle for them,” said Raif “Even though people think ‘Oh if you get rid of Obamacare, then I don’t have to pay for these people,’ well in the big picture, you’re gonna pay for people care whether you like it or not [and] having healthcare prevention is much better.” However, Raif decided to go out of her comfort zone, and did something she has never done before: volunteer for a campaign.

“I’ve just been involved for the last sixth months,” said Raif, “I felt like we needed to have a change and [I] thought we had some good candidates and I wanted to put my time and effort into helping them on their campaigns.”

“I’ve also been volunteering for Greg Stanton, and has done a famous job as mayor,” said Raif, “I’ve supported him since he was on the city council, and then when he was mayor.” She explains that his views on healthcare, immigration, and clean energy align with hers, and that she believes he is, “part of the greater good.”

“Most of the work I’ve done has been on the phones, and I also volunteer at the Democratic headquarters,” Raif explained. “On the phones, I call people [and] encourage them to vote and encourage them to do early voting, help get them information on the candidates. I don’t necessarily say ‘vote straight democrat’ I say, ‘What do you think about the candidates?’ I trying to give [the voters] information so they can make the best choices.”

“I really try to look at the candidates and vote for the people that I think will do a good job. I think that’s what people need to do more of, not just blue or red,” Raif said. “That’s the problem with our country, we need to think about what is best people, for Americans and also Arizonans.“