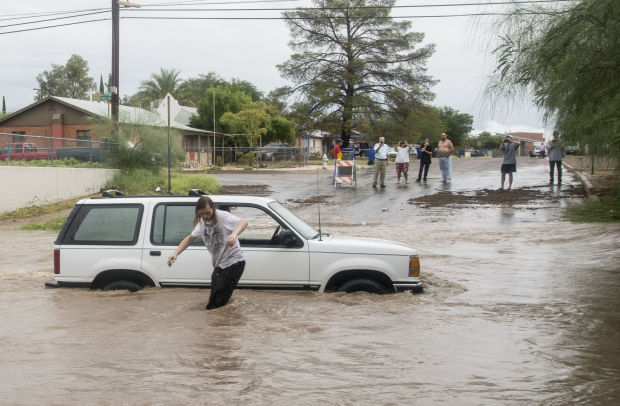 Desert tends to assume or imply that it does not get very much rain, and certainly not in a short amount of time, like a couple of weeks or a few hours.

While the 2017 monsoon season got off to a bit of a late start, it has been quite potent compared to recent years, and that potency is saturating the desert floors and causing some significant problems with flooding throughout Tucson.

Flash flooding has been prevalent in low-lying areas around the city, as river beds, washes and even some streets have seen some serious flash flooding, to the point that Sunday 17 hikers were forced to climb into trees and onto large boulders to avoid floodwaters that rushed through Tanque Verde Falls at Redington Pass – a creek canyon that is usually quiet most of the year, but surprised these hikers.

The last two of the hikers were rescued by helicopter Monday morning. There were no reports of any significant injuries among any of the hikers, though the same can’t be said north of Phoenix a week ago, when an extended family of 10 people were washed away by flood waters.

As Tucson (officially, at the airport) moves past 2.5 inches of rainfall this year – with much of it in the month of July – the desert gets saturated by water, especially when past monsoons had not been as prolific as this one is looking to be this year. Flash floods have become more common, and river beds that are normally dry are actually containing rivers of water in the hours following a monsoon storm.

In this particular area of Redington Pass, according to Shelley Littin of the Southern Arizona Rescue Association, there is usually just a little trickle of water and small pools. But in the wake of a storm that blew through the area Sunday, the water level surged more than 10 times in a matter of minutes, and the water at one point got to 7 or 8 feet in depth.

Among those rescued was a 4-year-old boy.

Meteorologists wish to remind people to use caution and heed the flash flood warnings that come from the NWS at any point, though the cooler temperatures are inviting to have outdoor activities.

People are asked to stay away from low-lying and canyon-type areas in the midst of summer storms and in the aftermath, and also avoid driving cars anywhere near a roadway with water on it, as it is often difficult to tell how deep the water is and it can be easy to get stranded.