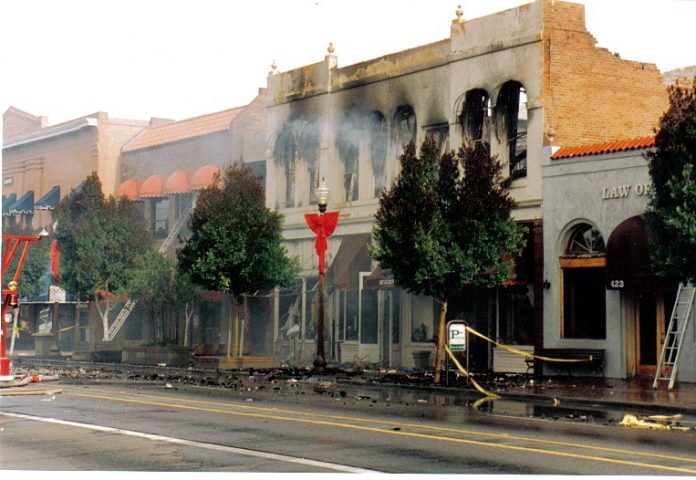 Originally published April 23, 2010 – It’s not a subject that anyone likes to talk about. But fires have always been the bane of cities. Think the Chicago Fire, the San Francisco Earthquake or the deadly Shirtwaist fire in New York City. They all caused considerable damage — in some cases virtually destroying cities.

Tempe has experienced its share of devastating conflagrations over the years. Understandably many were in the early years when construction methods were less substantial, firefighting equipment more primitive and firefighters volunteer non-professionals.

The earliest recorded fire in Tempe was 1888. The Tempe News faulted the community on its fire prevention practices. “Town ditches should be kept full of water. The lack of this essential fluid was severely felt at our late fire.”

Major structure fires occurred at seemingly regular intervals.  Some buildings were struck more than once – as we will see. The first Andre Building at 3rd Street and Mill burned to the ground in 1889.

The 1890’s proved a particularly destructive decade. In 1894 the Tempe Hotel at 3rd Street and Mill, was consumed by flames. As was the Arlington Hotel two years later. Hayden’s Grain & Hardware Warehouse – a wood-framed structure – was struck in 1895.

Major fires also occurred in 1901, 1902 and 1910. Flames obliterated both the Hayden Flour Mill and the Tempe Cotton Exchange building in 1917.

A trio of fires in 1955, 1956 and 1957 resulted in the loss of the of the 46-year-old Tempe Union High School, the Ira D. Payne Training School at Arizona State College, and the Phoenix Citrus Packing Company.

One would imagine that in the latter years of the 20th century with improved construction methods and materials, and fire-safety installations like sprinklers fires would have been dramatically reduced.

But firefighters were still kept busy with a spate of downtown conflagrations that destroyed or seriously damaged a number of historical buildings during the 1970s, ‘80s and ‘90s.

The 1898 Tempe Hardware Building nearly succumbed to a 3-alarm chemical fire of questionable origin on the night of March 31, 1976. Although the building was saved, all its interior fixtures were lost.

The Ellingson Grain Warehouse at 7th Street and Maple, later called Hick’s Machine Shop was consumed by an arson fire in 1987. Z’Tejas is now ensconced in a stylized-recreation of the building.

A late-night fire on December 27, 1990 in Stan’s Metro Deli entirely consumed the 1888 Chipman-Petersen building — and heavily damaged its neighbor the Vienna Bakery building.

The Andre Building was seriously damaged by a restaurant-remodel fire in 1999. This time the structure was saved in part because of special reinforcement required in a 1981 renovation.

Regrettably, as long as people occupy the structures they build, fires will continue to plague our buildings. But, with strong building safety codes more historic and future edifices will be around for people to enjoy in the future.