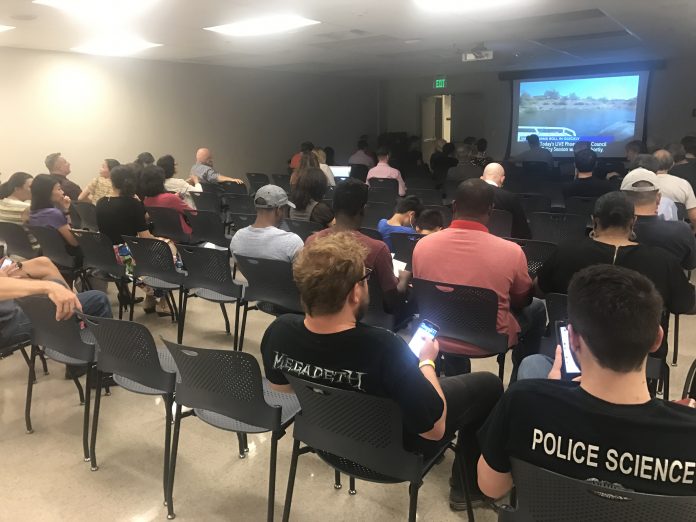 A City Council Policy Session was held on Monday, September 12th to discuss the Fast Track Cities Initiative. If this policy passes, Phoenix would be the 11th city in North American to implement this initiative in their city.

On World AIDS Day in December of 2014, this initiative was created in Paris with the hopes of ending AIDS in numerous cities around the world.

Although this idea began almost three years ago, this plan has already reached 80 different cities across the globe, according to the International Association of Providers of AIDS Care (IAPAC).

In January of 2017, Laura Pastor, the Vice-Mayor of District 4 and Councilman Daniel Valenzuela were appointed by the Mayor to co-chair a committee composed of 23 individuals.

The individuals who made up the committee are people living with HIV, medical providers, community organizations, local advocacy groups and government departments in the HIV field, stated Deanna Jonovich, City Manager.

Jonovich acknowledged those committee members who worked tirelessly on this plan at the policy session. Those in attendance were encouraged to stand for recognition.

Applause roared from the crowd as the committee members stood, with support from the those behind them.

“Together we worked to ensure that no population or community within our city is unfairly discriminated against, overlooked or ignored,” said Pastor. “It is important that Phoenix continues to reaffirm itself as a community that is a comfortable place to live where all feel welcome and is safe from discrimination.”

With the help of an organization called UNAIDS, a 90-90-90 treatment target was created to help end the AIDS epidemic. “This initiative holds the hope of ending AIDS as a public health threat in Phoenix, once and for all,” said Pastor.

The target for this initiative aims to have 90% of all people living with HIV diagnosed, taking treatments and virally suppressed by 2020.

One critical goal this initiative hopes to accomplish “is to eliminate the stigma of HIV by educating the community so that this is no longer a deadly disease,” said Kenja Hassan, a representative of Arizona State University.

Although there are numerous tactics to change the viewpoint those have created regarding HIV, stigmas are still a major issue for the reduction of HIV.

Hassan continued to speak about the stigmas surrounding HIV and the dangerous effects they can have on those affected.

“The stigma that people carry internally can have devastating consequences,” said Hassan.

HIV positive individuals often fear the reaction of those closest to them due to the stigma surrounding this condition.

The issue is a number one priority to those involved with this initiative, to make sure those affected are accepted and supported by their communities.

As a result, “those who know that they have HIV may be afraid to seek treatment because they are afraid to be found out,” said Hassan.

Because of the kind of treatment those affected receive, they often become more sick and ultimately the project requires more funds.

In order to prevent this from happening the committee has created numerous goals to help those who are affected.

In hopes of ending the HIV stigma, the Fast-Track City Initiatives hopes to use social media as a platform to reach all communities to inform them of what it means to be HIV positive so everyone can become more educated on what it means to be at-risk.

“Thank you for giving us the opportunity to help guide this process and obviously moving forward, to help make sure this gets fully implemented because it makes a huge difference,” said Mayor Greg Stanton.

The action to approve the Fast-Track Cities Initiative passed unanimously.