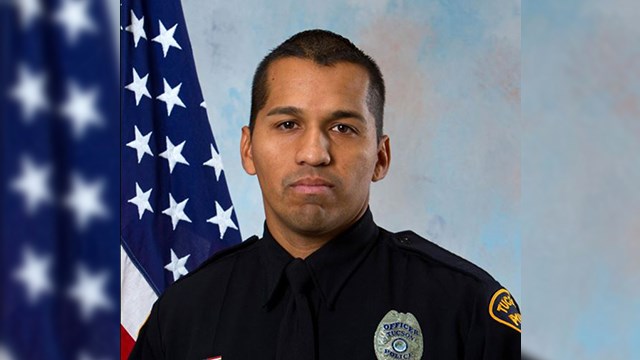 It is said that a cop is on a razor’s edge – jsut one life decision away from becoming a criminal.

For one Tucsonan, that life decision came after he was a cop. And that decision will send him to federal prison as a gun smuggler.

Joe Santiago Valles was a Tucson Police Department officer from 2012 to 2014, but last week was sentenced to 6 1/2 years in federal prison after it was revealed that he was one of the masterminds of a gun-smuggling ring along the U.S.-Mexico border.

Valles and federally licensed firearms dealer Timothy Veniga were found to be the ones behind the ring, which involved a foiled smuggling attempt at the border and a raid on an airstrip in the Mexican state of Sinaloa, resulting in the recovery of rifles that could take down a helicopter, false gun-sale recipts and various stolen identities meant to facilitate the transit of guns over the border.

Valles was sentenced in federal court after pleading guilty to 30 federal counts which included witness tampering, falsifying federal firearm record s and identity theft. Valles used the identities of those he arrested while on the beat as the basis for his operation.

Veniga, the co-conspirator is still undergoing prosecution from federal attorneys.

Federal agents were tipped off to the scheme when a man tried to smuggle a pistol into the U.S. at the Nogales checkpoint, and officers noted the serial number on the gun had been eliminated and painted over, though officials were able to link it back to a gun sale at Ballistic Firearms in Tucson the previous day – a business that Veniga ran out of his home. Valles had a gun-painting service at the same location.

When U.S. Bureau of Alcohol, Tobacco, Firearms and Explosives (ATF) agents investigated further, they noticed that every federally required gun-sale form at Ballistic Firearms had a member of Valles’ family on them, which agents used as a “red flag” to signal a possible smuggling operation.

A .50-caliber rifle, one that is often used by drug cartels and has been known to shoot down law-enforcement choppers in Mexico, was traced back to Ballistic Firearms after being seized by the Mexican military at an airstrip in Sinaloa.

The raid, in September of last year, came about when a man carrying three guns was arrested in Mexicali. The military was informed of a delivery of firearms at the airstrip in Culiacan later that day.

The raid produced the .50-caliber rifle and several AK-47 rifles. The .50-cal rifle also had its serial number removed and painted over, but an ATF official based in Mexico took a photo of the gun and it was traced to a man in Tucson who supposedly bought the firarm at Ballistic. The man, by the way, was arrested by Valles in 2014 for a DUI, and Valles reportedly kept all his personal information and used it to fill out ATF forms required for gun pruchases – including the man’s date of birth. The man was not implicated i the ring, as she testified that he cold never afford a gun with a vlue of $8,000.