Home Community End of an Era: Shane Doan Says Goodbye to the Coyotes 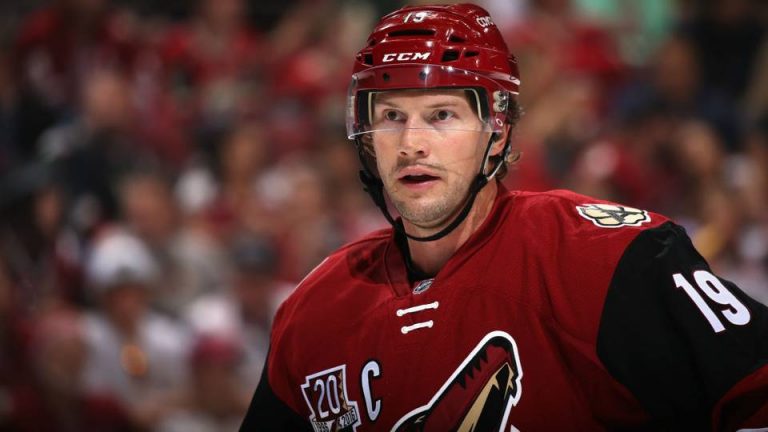 Coyotes fans who congregate at Gila River Arena in Glendale this fall won’t be seeing their beloved team captain on the ice.
The Coyotes surprised much of the sports community with their announcement on Monday that they will not offer Shane Doan a contract. The news signals the end of a 21-year-relationship that made him a fan favorite and hockey legend.
While he still hasn’t decided if he will retire, the veteran player will have to go elsewhere for time on the ice. He has the choice to retire or find another team to play for.
In his statement, Coyotes owner Andrew Barroway said “The time has come for us to move on and to focus on our young, talented group of players and our very bright future. This was a very difficult decision given what Shane has done for the Coyotes and his unparalleled importance to the organization. With that said, this is necessary to move us forward as a franchise.”
Despite much curiosity during the season, the team’s star forward declined to comment on his future and whether he would continue playing or retire. Just in case, fans treated him to a big send-off applause following the season’s final game.
The Coyotes made a run to the 2012 Western Conference finals, but the five seasons that followed were dissapointing with missed opportunities and playoff dreams left unfillfiled. Since then, the team has been focusing on rebuilding and improving it’s roster of young, up-and-coming players.
“On behalf of the entire organization, I would like to sincerely thank Shane for everything he’s done for the Coyotes on and off the ice the past 21 years,” Barroway said in Monday’s statement. “Shane is a Valley icon who had an incredible career and was one of the best captains to ever play in the NHL.”
Forty-year-old Doan made his mark as a hometown icon, serving as a tremendous source of pride for passionate hockey fans. He was admired for his professionalism, work ethic and relationship with the community.
“Shane deserves an enormous amount of credit for keeping the Coyotes in the Valley and for growing the game of hockey in Arizona,” Barroway added. “He is beloved by our fans, corporate partners and the media and has been a tremendous leader for us in the community, and a great role model for kids. We wish him and his family all the best in the future. He will be a member of our Pack forever.”
Doan began his NHL careers as the seventh overall draft pick in 1995, joining the Winnipeg Jets. When the team moved to Arizona and changed names the following year, Doan came with and established a successfull career in the valley of the sun.
In 2015-16, Doan boasted one of his best seasons, finishing with 28 goals and 19 assists. Last season, he was limited to six goals and 21 assists, and for the first time in his career, he agreed to waive his no-trade clause for the chance to go after his Stanley Cup dreams, but no teams pursued him.
Sources say that Doan may end up in the Coyotes’ front office upon his retirement. As for the new captain? Chances are defenseman Oliver Ekman-Larsson will assume the role, following in Doan’s footsteps.