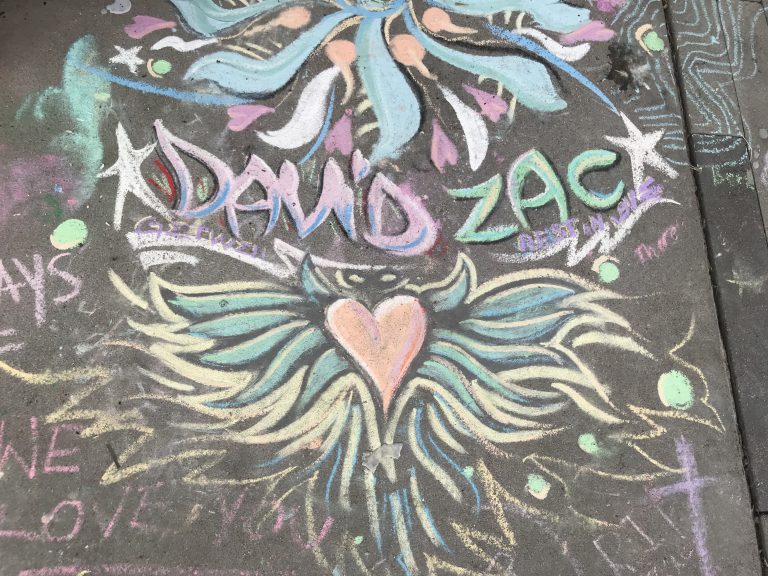 After the early morning shooting on Oct. 5 of two Downtown Phoenix residents, Roosevelt Row is in shock, but the community has come together to remember their memory.

Local Roosevelt Row residents and friends of the two victims created a memorial in front of Jobot Coffee and Bar.

Walter and Bessent were shot in nearby parking lot near Roosevelt Street and 3rd Avenue around 3:30 in the morning on Friday Oct. 5, according to police. Walter died shortly after the shooting due to his extensive injuries while Bessent was hospitalized in critical condition and died Wednesday Oct. 10.

Zachary Walter (left) and David Bessent (right). These photos were courtesy of the GoFundMe accounts made for them by their friends and family, both linked down below.

According to Johnny Rios, an employee at Rise Craft Coffee and Eatery, located one block from Jobot Coffee, said that it was normal that the two men were walking around Roosevelt Row at such an early time in the morning.

“It’s normal that they were walking around at that time,” Rios said. “Jobot stays open super late for the bar so they were probably just heading home from their shift.”

Phoenix police are still investigating the suspect involved in the shooting, but the lack of arrest has put an uneasy feeling on the Roosevelt Row residents. According to the Phoenix Police Department, the suspect might have been driving a white SUV during the incident.

Ashley Bourget, the owner of the retail pop-up shop Pop Phoenix, explained that the Downtown Phoenix community is on high-alert since the shooting happened. She said that the community is very close and “tight-knit” so many people don’t know what to expect.

“I’ve thought about it (the shooting) every single day since it happened,” she said. “It makes me look at people differently and makes me wonder if they have a gun.”

According to Bourget many local Roosevelt Row residents don’t know what to expect and they are concerned about being more aware of what’s happening with the community.

Another local Roosevelt Row resident, William Archer, manager at Buried Treasures, a locally owned crystal shop, said that the community should not be scared, but should put some more safety precautions within the community such as local security guards and more security cameras.

Local residents have drawn chalk graffiti to remember the victims from their community.

“It was a random act of violence; wrong place, wrong time,” he said. “It just happened.”

But, even with the local residents being on high alert, the community has come together to remember Bessent and Walter through candle-light vigils, sidewalk graffiti art and Go Fund Me accounts to help the victims families pay for the funerals.

“He (Bessent) always had a smile, always wanted to lend a helping hand and was here for the people, he was one of us.” Archer said. “ It is very unfortunate that we lost somebody like him, a very peaceful figure that would never hurt a fly.”

“He (Bessent) always had a smile, always wanted to lend a helping hand and was here for the people; he was one of us.” Archer said. “ It is very unfortunate that we lost somebody like him, a very peaceful figure that would never hurt a fly. Neither one of them would.”

“David was one of the most amazing, surrealist artist down here,” Rios said. “ He was always in great high spirits and even if he were still here anybody would tell you this exact same thing.”

Through a heartfelt description of Bessent, Rios said that he was friends with Bessent for seven years and described him as an “overall great human being”. He said that even through the loss of the two victims, it will create a stronger community oriented environment.

But, even though through this tragic event the Downtown Phoenix community lost two very talented residents they have been remembering the two victims to become a closer community.

“ It’s amazing that we’re all able to communicate and stay on the same page,” Rios said. “ There’s some positive that’s going to come out of this and there will be justice.”

To help the families of the two victims there are two GoFundMe accounts set up for each victim.