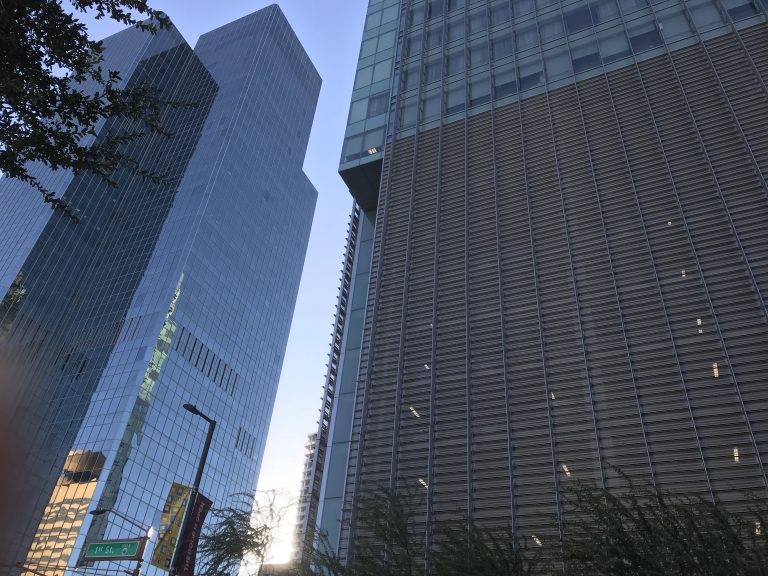 Downtown Phoenix has not only transformed visually, but the downtown Development has transformed its tourism and business industries economically.

“We feel as the downtown Phoenix development continues, we’re just going to continue to become a more attractive destination for large conventions and meetings,” Trummel said. “Certainly last year we had quite a number of visitors come to the Greater Phoenix area. “So we see this as a very positive time for a Greater Phoenix tourism. These signs point to positive economic growth for Phoenix.”

“We’re also seeing an influx of a lot of companies that are moving into the office spaces and so there’s been a tremendous job growth, especially in the last two years with a lot of tech companies moving into downtown,” Klocke said.

“That all begins to sort out itself and then it’s kind of like the snowball rolling down the hill—getting bigger and bigger and so that all of this investment, whether it’s a new office, a new residential facility or a new educational facility,” Klocke said. “All of that helps to grow each of those other sections, segments of the economy.”

In 2018, consumers spent $2,706,021 within a five-mile radius of 1st Street and Washington Street in Downtown Phoenix. A significant amount of the spending came from food and drinks totaling an estimated $849,744.

“In 2008 we had about a hundred restaurants,” Klocke said. “Today we have 200 restaurants. Not only is it expanding business, but there’s a lot of job opportunities with all those restaurants too.”

“That kind of new and exciting vibe that I think downtown Phoenix really has at the moment and will have for quite some time is appealing, to our meeting planners and also the attendees,” Trummel said.

Sara Scoville-Weaver, Business Development Manager at Downtown Phoenix Inc. credits a “regional shift to urbanism” for the rapid growth and development in downtown Phoenix.  In addition, the opening of multiple college campuses including the Arizona State University downtown campus and the biomedical campus have further developed the area. Young adults have started moving into the downtown area and renting apartments.

“If you were here five years ago and you’re coming here to Phoenix for the first time in five years, you won’t recognize it,” Trummel said. “We think that there’s probably some truth in that for the next five years.”

According to the Downtown Phoenix Business Report, the economic activity in downtown Phoenix supports over 66,000 employees. The annual combined income equals an estimated $3.9 billion. “I’ve been doing my job for 15 years down here and this is what people have wanted. They want to see a strong, vibrant, dense downtown,” Klocke said.