Home Community Diversity in the State Legislature: Do We Reflect Our Demographics? 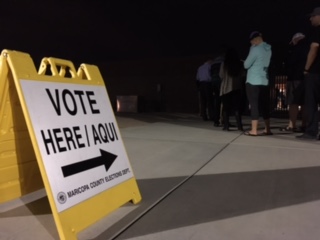 As a state, Arizona’s state legislature is high ranking in terms of female and racial representation, but the demographics still aren’t perfectly in line with Arizona’s population demographics.

Arizona’s legislature boasts the third highest percentage of female legislators, according to the The Arizona Republic.

Representative Rebecca Rios (D), the Arizona House’s Minority Whip, said that while she is proud of the state’s representation with women, it’s still not enough.

“If you have a body that is … over represented … by perhaps Anglo, middle-aged, white males the legislation that is going to be produced in the house and senate typically either does not take into account the need (and) experiences of minority groups,” Rios said. “As we’ve seen in Arizona it tends to be very punitive toward minority groups and other populations.”

In Arizona, while the African American population is 4.8 percent according to the latest census. The legislature only has one African American member, Representative Reginald Bolding (D). Bolding is one of 90 members of state congress, meaning he is a little over one percent of the State Legislature.

Bolding said that one of the best ways to solve that is to encourage African American candidates to run. Bolding said that building a diverse staff is also a good way for the legislature to help.

Arizona is 31% Latino according to the latest census, while the state legislature is only 20% Latino. All but one of those Latino representatives are Democrats. The sole exception is Representative Steve Montenegro, a Republican from Litchfield Park.

“At the end of the day, the Legislature, in a perfect world, should look like the people in the state that it represents.” Representative Rios said. “Which means we should have 30 percent of the legislature Latino; we would have more than one African American legislator.”

That lack of Latino representation has led to some controversial laws, according to Rios, such as 2010’s Senate Bill 1070, which Rios and others have called “racist”.

“(Senate Bill 1070) was in my estimation … a blatantly racist piece of legislation that was directed at the Latino population and intended to be punitive,” Rios said. “That legislation was implemented with the intent of harassing and scaring Latino families.”

At the time, only one of Arizona’s Latino legislators voted for SB 1070, Republican Montenegro.

Despite the negative impact that bill had on Arizona, Rios thinks the silver lining is beginning to show.

“I have met dozens of young Hispanic American and Latinos that have said that, ‘you know what it was, Senate Bill 1070 that was the catalyst for me becoming involved in politics,’” Rios said. “It’s a beautiful thing for me, that I see now in 2016, all these young people that have used all that anger (toward SB1070) and channeled it into voter registration and campaigning.”

However, that positive movement may be impacted by House Bill 2023, also known as the “ballot harvesting bill.” The bill makes it illegal to take another person’s ballot to the polls.

Representative Rios said that the bill is directly focused on suppressing the Latino vote. She said that Republicans passed the legislation because many nonprofit organizations were helping people in Latino communities register to vote, then encouraging them to fill out their ballots and taking those ballots to the polls.

When reached out to for comment on diversity within the state legislature, the House press secretary, Matthew Modesitt, was unable to get any Republicans to comment.