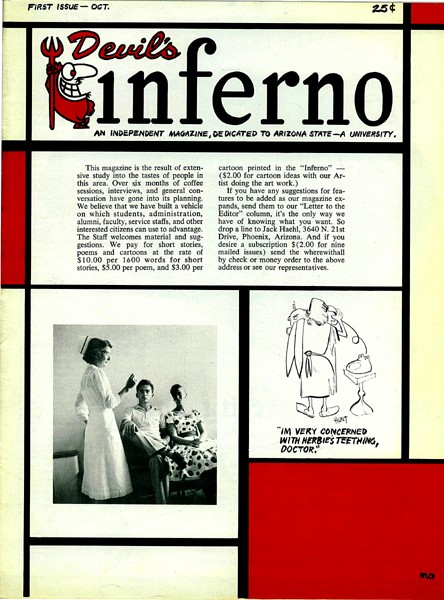 Originally published April 16, 2010 – Jack Haehl and Mike Obrenovich ─ two names that are long forgotten. But their legacy remains in the form of Devil’s Inferno, a quirky independent Arizona State College magazine they first published back in October, 1956.

In their debut issue Haehl, editor, and Obrenovich, associate editor, declared their “…magazine is the result of extensive study into the tastes of people in this area. Over six months of coffee sessions, interviews, and general conversations have gone into planning. We believe that we have built a vehicle on which students, administration, alumni, faculty, service staffs, and other interested citizens can use to advantage.”

Looking at it more than five decades later, the publication provides intriguing insights into what was on the minds of the campus community at the time.

An issue of considerable importance was accommodating Sun Devil football fans in the 20 year-old Goodwin Stadium along Apache Boulevard. The small field could only hold 15,000.

An editorial lamented “tickets are sold out far in advance which makes it impossible for…fans…to view the teams prowess.”

According to the editorial stadium managers came up with the idea of providing “seating…directly on the playing field which will accommodate many thousands.” The strategy was not without its risks, however.

“The solution may hinder the game somewhat,” the editors acknowledged, “but it is felt that something must be done to remedy the situation as it is now. It is hoped that fans will be less disgruntled being cleated, than when they couldn’t see the game at all.”

“Of course these measures are only temporary and we feel that since the City of Tempe has offered 77 acres of land free in Papago Park on which to build the stadium we feel sure the Board of Regents will recognize the tremendous growth and interest and recommend a new stadium sufficient to serve the university,” said the editorial.

It would be another two years before Sun Devil Stadium would be built ─ but not in Papago Park. Rather it was squeezed into the saddle between the Buttes where its first game was played before a sellout crowd of 30,000.

Scanning through the ads provides a snapshot of Tempe in the late ‘50s. The iconic Ray’s Barber Shop was preparing to move from its home at 719 Mill Avenue to the soon-to-open Tempe Center on the southeast corner of Mill and University.

Monti’s Casa Vieja, “just south of the bridge,” was offering “steaks (with) prices geared to the college student.”

The Hut was a popular student gathering place at 11 West 2nd Street.

And what would a college magazine be without a centerfold? In its premier issue the editor’s promised “Each month our Student Queen will be clothed to no less a degree than is accepted at the average public pool.”

Regrettably we know nothing about Haehl and Obrenovich. All that remains is the magazine they put their heart and soul into so long ago.