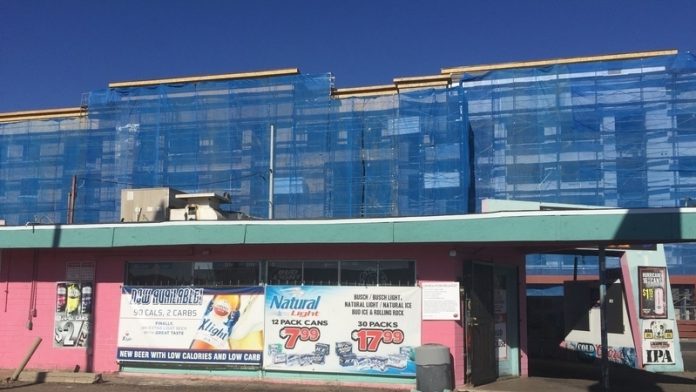 When the future of a beloved liquor store is in jeopardy, the community bands together to save their precious landmark.

Near 7th Avenue and Indian School Road, Melrose Drive-Thru Liquor Store is a neighborhood icon, with its neon pink exterior and and its historic 1950s-era appearance.

Earlier this summer, neighbors got wind of the expected demolition as developers plan to build an apartment complex in this central Phoenix location.

A Scottsdale-based luxury apartment developer owns the liquor store, and has plans to construct a new apartment building behind it.

Discussions at community meetings soon followed, where neighbors expressed their expectations that the developer would leave the liquor store alone after the construction of the apartment complex.

When a notice of demolition was posted on the building, community activist Stacy Champion began a petition to halt any demolition permit for the liquor store. With 1,373 signatures, the petition fed into public outcry, and in just a few short weeks, owner P.B. Bell withdrew its request to demolish the structure.

The decision resulted from a special meeting of the Phoenix Historic Preservation Commission, where they discussed the vibrant pink-and-green color of the exaggerated, cartoonish “Googie” architecture of the 1950s.

The owner had plans to replace the building with a dog park and parking lot for residents of the new 204-unit apartment complex coming in, but neighbors had other ideas. Many people approach the company with ideas for saving or reusing the building, and P.B. Bell said it will pause the demolition for now while they consider these options and what’s best for the apartment project and neighborhood as a whole.

Two people have stepped forward and offered to buy the building with plans of rehabilitating it and bringing in new businesses in the neighborhood known for small local shops and vintage stores. The commission decided the liquor store is eligible for city historic status, so members voted to begin the process of protecting the building. Extra steps are necessary before a developer or owner can receive a demolition permit for an historic building.

With the teardown put on hold, neighbors feel slightly relieved, but still concerned about the possibility of losing interesting architecture in the Melrose District, part of the area’s distinct charms.