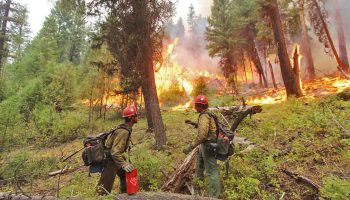 Firefighters are using a range of tactics as they battle a blaze on the eastern slopes of the Santa Catalina Mountains overlooking Tucson.
The Burro Wildfire had burned through upwards of 23,000 acres of brush, grass and trees near Redington Pass and Mount Lemmon as of Wednesday afternoon. A public meeting took place Wednesday night at Sahuaro High School to update the community on the blaze and the progress toward containing it. The meeting was also live streamed on Facebook, and firefighter officials shared the news that the fire is now eleven percent contained.
Six hundred personnel are assigned to the firefighting efforts. According to an update released Wednesday, crews are implementing burnout operations to deprive the fire of fuel, limiting it’s southward expansion. Crews are actively working to keep the blaze contained. The rugged terrain on the northeastern side makes it unsafe for firefighters and only aircrafts are dropping water there.
Sandra Lopez, the public information officer for the fire, said Tuesday the blaze had cost $1.2 million so far.
High temperatures, low relative humidty and no precipitation has favored burning conditions and made it easier for the fire to spread.
The Pima County Sheriff’s Department helped with evacuations on Mt. Lemmon on Monday, and an evacuation order remains in effect until further notice for all residents along the Catalina Highway from Mile Marker 0 and onward, north to Mt. Lemmon. No residents are allowed through to Mt. Lemmon, including summer cabin owners and part-time residents.
Stay up to date on the latest information regarding the fire by visiting the Pima County Office of Emergency, Southern Arizona Red Cross and the official Burro Fire Info page.
Southern Arizona Red Cross: https://www.facebook.com/RedCrossSAZ or 520-318-6740