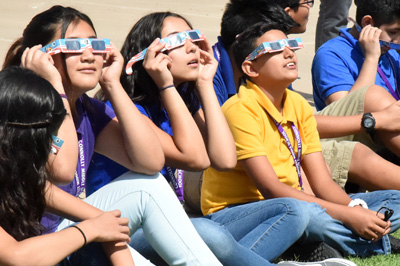 Aug. 21, 2017 was a big day for astronomy and eclipse aficionados all across the United States. It marked the first solar eclipse to cross the U.S. from coast to coast, west to east, since 1918.

A solar eclipse is when the moon passes in front of the sun. Eclipses can be partial, where only part of the sun gets blocked, or total, which is not as common and is much more dramatic to see.

Despite some spotty cloud cover, observers in Arizona witnessed a partial eclipse, where about two-thirds of the sun was covered by the moon at the peak, which occurred at 10:33 a.m. Arizona time. Just walking outside from about 9:30 a.m. to almost noon, there was a sort of eerie, diffused sunlight overhead.

At Connolly Middle School, the 7th-grade science team thought it would be a great opportunity for the entire school to watch the eclipse outside, wearing official protective eyewear. Students had to receive parent permission to participate. (Two teachers for each grade level stayed inside with those students who opted out of the activity.)

This was something that the school has been planning for more than a year. “It was actually an initiative started by former 7th-grade science teacher Jennifer Might, who ordered the official solar eclipse viewing shades approved by NASA a year ago,” explained Principal Kathy Mullery.

After consulting with District-level administrators, Mullery and the Connolly Middle School staff decided to take advantage of this rare opportunity and make it available to their students.

“With careful planning and supervision, we were able to provide what could be a once-in-a-lifetime experience for many of these students,” said District STEM Specialist Jason Parsons.

Like all teachers at Connolly Middle School (and throughout the District), Holly Barwick stressed to her class the extreme importance of not looking up toward the sun at all, even for a split second, without wearing the protective eyewear that each one received. They were instructed to look down at the ground at all times until they put on their shades.

Each class filed outside with their teacher, then covered their eyes with their eclipse shades, and looked up.

Patrick Young, associate professor with Arizona State University’s School of Earth and Space Exploration described the eclipse well when he said the sun will look like it has a big bite taken out of it.

Before the eclipse, the District STEM Department coordinated curriculum resources for the schools for all grade levels and encouraged teachers to teach STEM activities and lessons.

Connolly Middle School students in math classes will use their observations to bring increased meaning to scientific notation calculations, and English language arts classes wrote summaries of their experiences. Lisa Jones’ Journalism PBL class at ASPIRE Academy applied their reporting skills by researching the solar eclipse and covering the event for publication in the September edition of the school newspaper, ASPIRE Times.

Holly Barwick’s 7th-grade science class will further study solar and lunar eclipses in the spring and will look back on what they witnessed during the eclipse as they learn more about them, giving them real world experience for better understanding.

A Connolly community member even got in on the excitement. Arnold Meyers isn’t a teacher or a staff member. He doesn’t even have a child attending Connolly. He came just to experience the eclipse.

“I thought it was cool! It was awesome! I saw the last one and I didn’t want to miss this one,” he said.

He explained that this was his last chance because he will be about 100 years old for the next one. “Who knows if I will be able to see it then!” Meyers said.

“This is the biggest astronomic event of our lifetime,” Parsons said. “Connolly Middle School is the only school in our District I’m aware of that made it a school-wide event.”