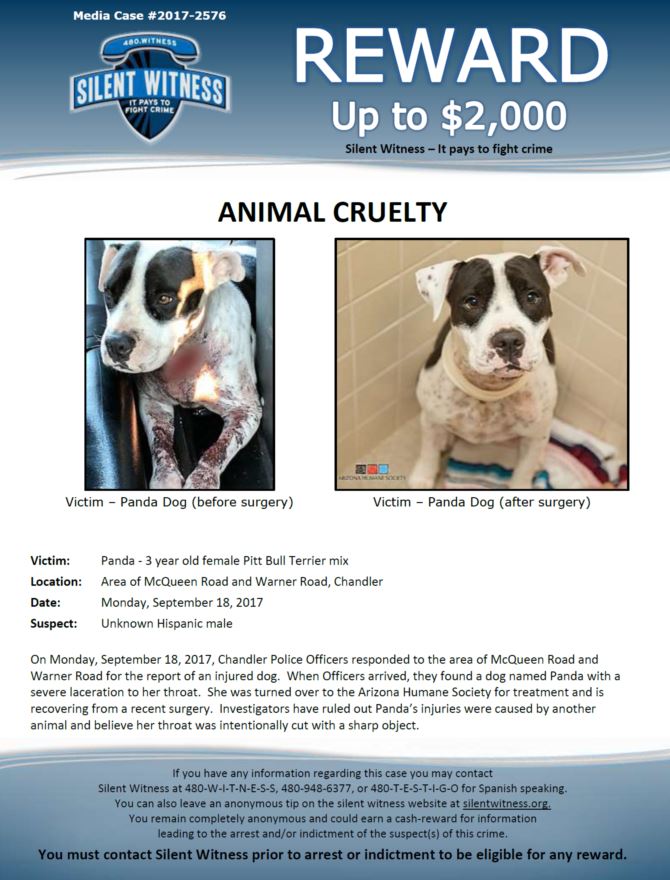 Chandler police are asking for the public’s help as they investigate an animal abuse case and search for the person responsible for hurting a three-year-old dog.

Panda, an American Pit bull Terrier Mix, was discovered near McQueen Road and Warner Road in Chandler on September 18. When officers arrived on the scene of the report of an injured dog, they discovered Panda with a severe laceration to her throat. She was taken to the Arizona Humane Society for treatment, and remains there as she recovers from a recent surgery in AHS’ Second Chance Animal Trauma Hospital™.

Thus far in their investigation, police have ruled out the possibility that another animal caused Panda’s injuries, and they believe her throat was intentionally cut with a sharp object. According to the official press release, Panda’s previous owner gave her to an unknown Hispanic male at Espee Park between Friday, September 8, 2017 and Monday, September 11, 2017.

Detectives are searching for any information in this animal cruelty case.  Anyone with information regarding this abuse, is asked to please contact either the Chandler Police Department at (480) 782-4130, or Silent Witness at (480) WITNESS (948-6377).  Silent Witness is offering a reward up to $2,000 for information that leads to the arrest or indictment of a suspect(s).