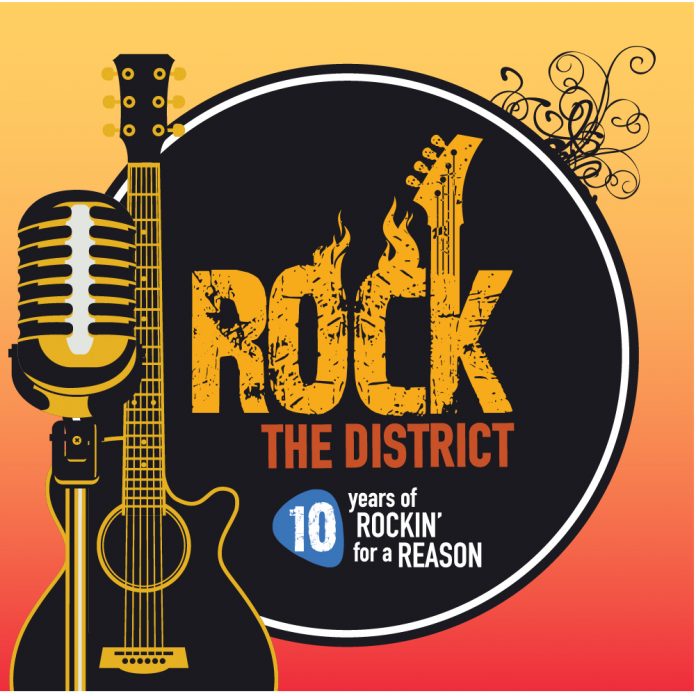 The Carefree Sundial will be shining with talent as celebrity headliners, alumni who made it big, plus 30 student bands take the stage for two unforgettable evenings in April at Rock The District, an annual fundraiser for the Cave Creek Unified Education Foundation.

This year’s Rock the District celebrity headliners include country stars Ryan Sims, Chad Freeman and Cali Rodi. Now in its 10th year, the event has often been a launching pad for big-time music careers. For example, Rodi performed as a student at the first Rock the District back in 2009 and was recently signed by Keith Urban to his publishing company, BOOM.

“Rock the District will be bigger and better than ever during our 10th Anniversary show dates on April 12 and 13,” says Rock the District organizers Kesha Cardinal and Sarah Byrne. “With the headliners, it will be a chance for all of Phoenix to see these world-class acts. With the alumni, it’s a chance to see how these former students have become up-and-comers in the music industry.  For the students, this will be a chance for friends, family and neighbors to see these teen bands and singers take the stage and show the world what they got!”

This year’s special tenth anniversary event will “turn it up to 11” with:

Among the alumni students returning to their roots are Tia Penny the youngest to play in Alice Cooper’s Proof Is In The Pudding and Homestretch, the band that won third place. Also appearing is Promise To Myself, an alumni band whose music has been chosen by Dutch Bros. Coffee to play in their locations across the country.

Rock The District will take place April 12 & 13, 2019 at East Sundial Circle, Carefree, Arizona 85377. Gates open at 5:00 pm on both days and shows start at 5:30 pm. Ticket prices range from $20-$75. Teachers and students with a valid ID can get general admission tickets for only $10! To learn more or buy tickets: rockthedistrict.net.

Ryan Sims is a musician whose incredible self-taught musicianship is evident in his performance; both as a solo artist, or with the energetic Ryan Sims Band.  As a founder of the immensely popular Arizona band EastonAshe, Ryan’s stylistic evolution has since landed him smack dab into the arms of country music.  Although country is his home, his shows include all types of music, enriched by Ryan’s award-winning vocals and warm and friendly performance style.

Chad Freeman & Redline was founded on March 13, 2009.  It didn’t take long before CFR quickly formed their own sound and started performing locally.  Local shows quickly grew into regional shows as they became regulars in Las Vegas on the strip and performing for PBR and NFR. Over the years they have been able to hit the stage for NASCAR, Super Bowl, CMA Fest and countless festivals, events and weddings.  Eventually Chad was picked up to tour internationally and has been on stage in Australia, New Zealand, Germany, Poland, Canada, Mexico, Chile, France and Switzerland to name a few.  Through it all Redline is happy to be celebrating its 10-year anniversary in 2019 and with the lineup as strong as ever.

Cali Rodi is a musical glitter bomb. You’ll most likely find this dirty blonde igniting the stage with ear candy that tastes more sassy than sweet. She credits her female inspirations to Katy Perry, Britney Spears, and Hayley Williams, but shines with a voice all her own. Cali splits her time between Los Angeles and Nashville, working on her debut project with her favorite collaborators. She is a musical ambassador for the TJ Martell Foundation and its fight against cancer, as well as a frequent performer for the PGA Tour’s military outreach initiative, Birdies for the Brave. Cali most recently caught the attention of superstar Keith Urban, who signed her to his publishing venture with Kobalt, BOOM.