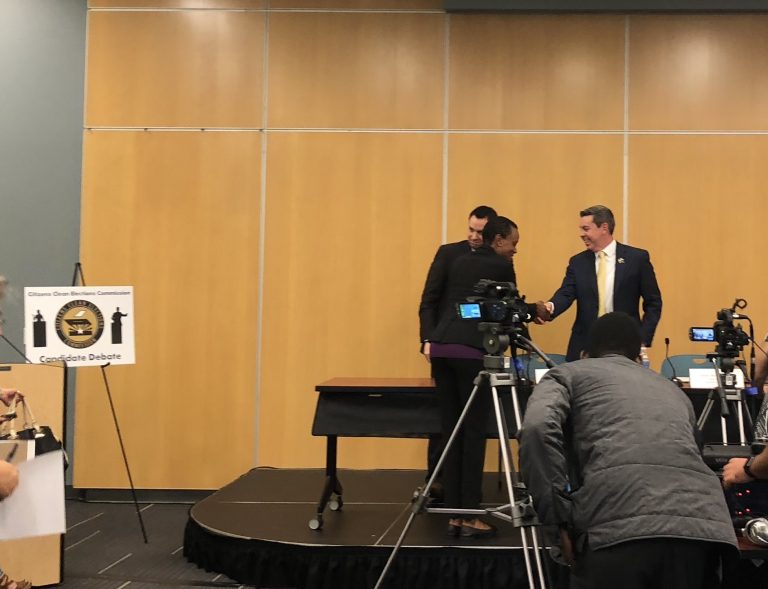 The debate took place at the Chandler Library Downtown branch on Oct. 9 including three candidates vying for a position on the state legislature representing District 17 that encompasses Chandler at the Arizona Legislature.

Republican House candidate Rep. J.D. Mesnard, as well as Democratic House candidates Rep. Steve Weichert and Jennifer Pawlik were given the opportunity to showcase their views and persuade opinion on the issues in the upcoming election. The group also eagerly took questions from the audience. Republican House Rep. Jeff Weninger, and Nora Ellen did not attend.

Pawlik began her opening statement by expressing to voters she is prepared to fight to make sure teachers have what they need to succeed and recognizes that funding for the city of Chandler’s education system is paramount.

“I am a teacher, that is what I am at my core,” Pawlik said.

Weichert expressed that education remained one the most heavily discussed topics he witnessed among voters. He quickly pronounced the need for budget reform.

Mesnard praised the Chandler Unified School District for having “some of the highest-achieving schools in the state” in District 17. However, Mesnard noted that not every school is being managed to its best ability and that poorly managed public and charter school’s must be held accountable.

Another major topic of discussion along the lines of education was that of Prop. 305 or the Expansion of Empowerment Scholarship Accounts (ESA).

Prop. 305 deals with the potential expansion of the Empowerment Scholarship Account Program to all public school students with a cap of 30,000 students. The original program allowed parents or guardians of students with disabilities the opportunity to receive an ESA from the Arizona Department of Education that could be used to fund their child’s choice of private education, homeschooling or other non-public education instead of having to put their child through the public school system.

Pawlik said she plans to “strongly vote no” on Prop. 305. Although Pawlik claims to be an advocate for opportunities this program provides to children with disabilities, she does not support the expansion of the program.

“I very strongly feel we should not be using public tax money to pay for private schools,” she said.

With this statement, the discussion turned towards the topic of charter and private schools and the funding they receive.

While Pawlik and Weichert were opposed to the idea that private schools should require taxpayer money to be funded, Mesnard countered that taxpayer funding is necessary for certain aspects of the private and charter environment.

“You need taxpayer money for private schools if you are going to fund special needs kids or foster kids,” said Mesnard.

The discussion was not just about education. Health-care concerns were also brought up by both Democratic candidates.

Weichert mentioned how many Arizona voters are concerned by health-care.

“Their deductibles and premiums are so high right now that they are forgoing preventative health-care,” Weichert said.

Mesnard countered that actions taken towards health-care such as the Affordable Care Act have had a negative effect on Arizona’s citizens and their ability to afford health-care. He did not provide facts to back up his claim, but he did double down on his earlier statement by saying,

“Even though it was supposed to be a solution it actually exasperated the problem,” Mesnard said.

The night concluded with each candidate having a chance to state their case to the gathered electorate that was in attendance. While each spoke passionately about the points they were attempting to make, it will ultimately be up to the voters to decide in November the candidates they feel made the best case during the campaign.