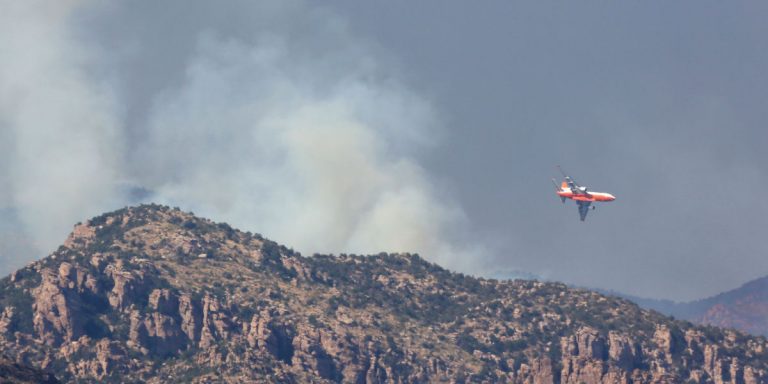 The latest wildfire in southern Arizona is about as stubborn as its name indicates.

Now the fifth active wildfire in the Coronado National Forest, the Burro Fire in the Santa Catalina Mountains has made strong progress since it started June 30 in Redington Pass.

As of July 3, the fire had charred more than 14,000 acres, and containment has been limited due to high temperatures and rugged terrain that has forced firefighters to take indirect tactics to fight the blaze.

Summerhaven on top of Mt. Lemmon north of Tucson, has been evacuated for protection reasons, though the fire incident team had not fully assessed he threats to structures in the area. However, the plan was best to evacuate so that the Mt. Lemmon access roads could be used by fire crews, and to present a potential fire break.

It was reported that three helicopters and three air tankers have been deployed to provide aerial cover and support for the firefighters, though in the early stages of the fight the aerial assets were the only ones able to attack the fire in any direct way, dropping retardant to try to limit its spread.

The weather forecast says there is a chance of rain in the area by late in the weekend, and temperatures are expected to drop while the humidity increases late in the week.

The Burro Fire in just three days was already making progress on the largest fire in the Coronado Forrest region, as the Frye Fire has burned more than 45,000 acres around Mt. Graham and is still burning after nearly a month. That fire was caused by a lightning strike, according to authorities.

The cause of the Burro Fire is still under investigation, but southwestern winds and warm temperatures blew the flames to the east, where dry brush provided the fuel for the quick acceleration.