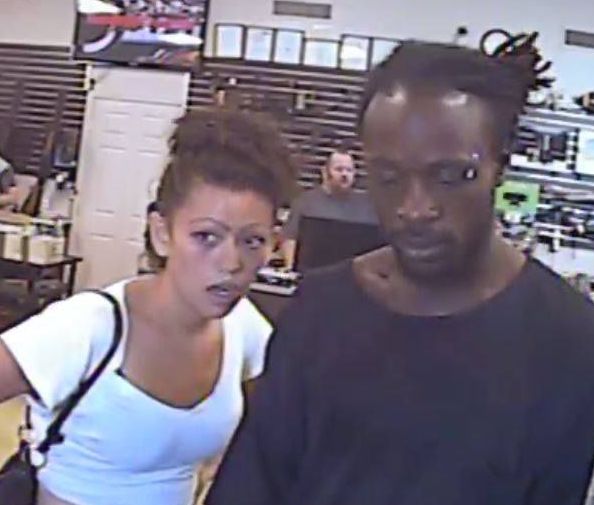 Is it a new “Bonnie and Clyde” in Tucson?

“Clyde” is already in jail, but “Bonnie” is still on the loose, though a surveillance camera caught her and now it’s a matter of locating her (without horses, or Sheriff Wyatt Earp).

The Tucson Police Department is looking for the female half of a brazen couple that committed a robbery at a pawn shop in the early afternoon hours last week, as the couple was apparently in the market for a firearm but didn’t want to go through the customary background check.

The male of the pair was caught and booked in jail on an unrelated charge over the weekend, but he has not given up the woman’s identity thus far, according to a TPD release.

The story is the couple entered a midtown pawn shop on Grant Road last Thursday (July 13) and the woman asked to see a handgun that was on display under glass. When the person behind the counter presented the gun into her hands, she reportedly ran out of the store with the man, identified as 33-year-old Daniel Moore.

According to the press release, the pawn-shop employee tried to chase down the couple, eventually tackling the woman, but he was hit on the head with some object and was forced to let her go, and the couple escaped. Moore was later arrested for a different reason.

Already running short on leads, TPD has released a snapshot of surveillance footage from the pawn shop, which seems to provide a pretty clear image of Moore and the unidentified woman who is presumed to still be in possession of the stolen handgun.

For that reason, anyone who has sighted the woman are asked only to call TPD (911 or 88-CRIME) and not to approach the woman, and there is a presumption that she may be armed and dangerous.

TPD is so far not releasing any information about the handgun, any identifying features or a serial number at this point. TPD is hopeful that the surveillance photo (seen here) can be what will help them find the woman and question her about the incident.