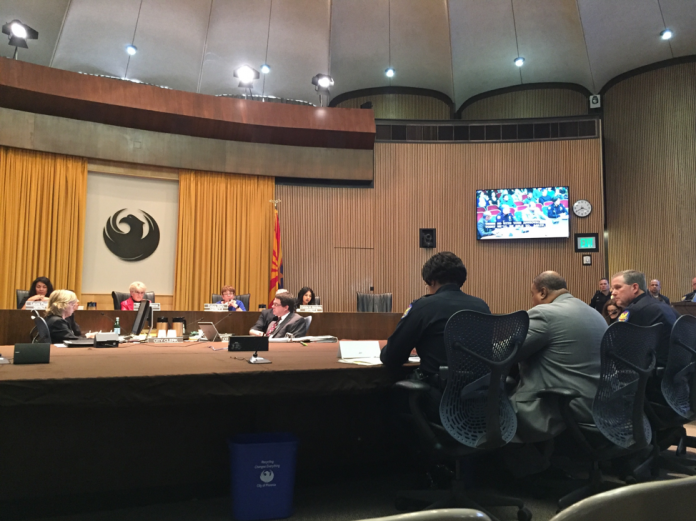 In the wake of the rise in police shootings, the Phoenix City Council appropriated over $5 million to police body cameras during the city council meeting on Wednesday.

The $5 million request merely allows for the purchase of the cameras provided by Axon Enterprise, Inc. The contract term will begin about mid-February and end on about the fiscal year of 2023-2024 adding up to about $16.7 million dollars. According to the ordinance, the money will allow for the Phoenix Police Department to hire 21 employees, in addition to the existing nine positions, to support and implement the program.

Prior to the vote, members of the public and the council said they had concerns about the use of facial recognition in the software. They said, as well, they hope that the Public Safety Committee will involve them in the policy making decisions in order to gain trust between civilians and police officers.

“Where I think maybe there is a misunderstanding, as it relates to redaction, is the way the software works. The equipment would allow the redaction tool to identify my face and then redact my face wherever I move within the technology within that video,” Kurtenbach said “it’s merely as a redaction tool.”

Chief Jeri Williams said they have not been able to work with the system, but with the approval they will be able to work to better turnaround rates for the videos.

“If we’re approved, will allow us more expediently to blur out, if video, or to redact audio that is imprudent for release so we can prepare case files more quickly, so those cases can move along and so we can properly process public record requests,” Kurtenbach said.

Although this meeting was not to approve the policy, the public and council said that the policy should be strengthened in multiple areas.

Councilman Nowakowski asked Williams if the policy includes what the reprimands for officers will be if they don’t turn on their cameras.

Williams said that the department currently has a policy against officers who turn their camera off with-out reason. “They, at minimum, get a written reprimand. We placed that in policy as well as ruled it out legally, as well as had training videos,” Williams said.

A citizen at the meeting, Shawn Severud, stood before the council previous to the vote . “It needs to have teeth so if an officer chooses to turn off the camera there is real punishment,” he said.

A group, “Poder in Action”, made an appearance to give testimonials before the vote was cast.

A member of the group, Parris Wallace, said she felt strongly about the strengthening of the policy.

“There must be a strong policy and disciplinary measures in place to truly be a step forward. Without strong body camera policies in place, this will just be a waste of over 5 million dollars and will let the Phoenix Police get away, providing a false sense of security and transparency. We expect all council members to demand a strict policy for community to see this is truly a step in the right direction,” Wallace said.

One of the citizens that commented before the council was Reverend Reginald D. Walton.

“I would hope that you take a look at yourselves as you vote. This is historic. This is like my predecessor said, this is one of the largest cities in America. You have the chance to help to make it better, for law enforcement and for the community at large,” Walton said.

ROCK IT UP Returns to Tempe Marketplace