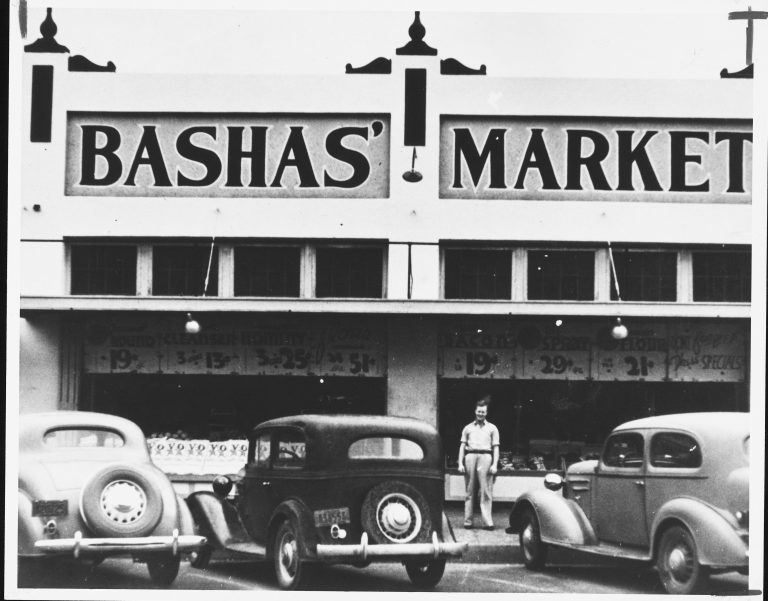 Bashas’ will begin a 90-day celebration this month to commemorate its 90th anniversary. From grocery card giveaways and an attempt to break a GUINNESS WORLD RECORDS title to a local charity challenge, other give-back efforts, and more, the supermarket chain is ready to celebrate with and thank Arizonans for their support through the decades.

“We are honored to celebrate our 90th anniversary with our team members, customers, vendors, and charity partners,” said Edward “Trey” Basha, president of Bashas’ and grandson of one of the company’s founders. “I’d like to give a heartfelt thank you to everyone for their continued support. Our goal is to express our gratitude and use this milestone as an opportunity to be of additional service to our communities.”

Bashas’ supermarkets began in 1932, when brothers Ike and Eddie Basha, Sr. opened the first Bashas’-branded grocery store five miles south of Chandler. Since then, the grocer has been a part of the fabric of Arizona, growing the company from one location to more than 100 statewide under multiple banners. The Basha family name is not only on grocery storefronts across the state; it is also visible in the names of local streets and schools, demonstrating just how engrained into Arizona the family, and the company is.

Following is a breakdown of some of the activities that will take place during the next 90 days:

On Monday, July 11, from 8 a.m. to 11:30 a.m., Bashas’ bakery team members at select grocery stores will cut, fry, and package doughnuts in preparation for its attempt to break the GUINNESS WORLD RECORDS title the next day for largest doughnut mosaic (logo). The Bashas’ supermarket at Warner and McClintock in Tempe (address: 1761 E. Warner Rd, Tempe, AZ 85284) is the designated store location for news outlets interested in capturing interviews and visuals of the doughnuts being prepared.

On Tuesday, July 12, from 3:30/4 a.m. to 2:30 p.m., Bashas’ will roll out the red carpet as it attempts to break a GUINNESS WORLD RECORDS title at Basha High School in Chandler, Ariz., using more than 14,000 doughnuts to assemble a 900-square-foot mosaic of its 90th anniversary logo. The current GUINNESS WORLD RECORDS title for largest doughnut mosaic (logo) was set in January 2012; it featured 7,040 donuts and was 512 square feet in size.

Less than a week after Bashas’ attempts to break a GUINNESS WORLD RECORDS title, the supermarket chain will kick off a “Community Choice Charity Challenge” on Monday, July 18. During the nine weeks that follow, members of the Arizona community will have an opportunity to vote for the 501c3 charity that they feel is most deserving of an additional $50,000 in funds from Bashas’.

The final voting phase will feature 10 nonprofits competing for the most votes to secure the additional $50,000. Bashas’ will announce the $50,000 nonprofit winner the morning of Friday, September 23.

“Bashas’ has provided significant contributions to Arizona on so many levels,” said Mark Miller, president of Arizona Food Marketing Alliance (AFMA). “Every state should be lucky enough to have a supermarket chain like Bashas’. Not only is Bashas’ one of our state’s largest employers, but the people who work at Bashas’ are so friendly and genuine. They are good, salt of the earth people. They truly care about our community.”

Once a week, for 10 weeks, Bashas’ will randomly give away $500 in grocery gift cards. Each grocery week will start with a Wednesday and end on a Tuesday, starting Wednesday, July 27 and ending Tuesday, Oct. 4, to coincide with Bashas’ weekly grocery ads. Shoppers who activate a Personal Thank You (loyalty) offer in their account each week will be automatically entered for a chance to win.

Sept. 17-18: Performing Random Acts of Kindness Across the State

Companywide, Bashas’ Family of Stores plans to give $100 to each of its 113 grocery stores in Arizona and New Mexico to perform a random act of kindness for their local community. Whether the store team decides to donate the money to a local food bank/shelter or give the funds to an individual struggling to pay for groceries, each store team will decide where the money will go. Their random acts of kindness will take place between Sept. 17-18.

About Bashas’ Family of Stores

Bashas’ Family of Stores – the family-owned grocer that operates Food City, AJ’s Fine Foods, Eddie’s Country Store, and both Bashas’ and Bashas’ Diné supermarkets – is an Arizona-based company. With more than 100 grocery stores, it is one of the largest employers in the state and one of the Best Places to Work in Arizona. Since the company’s inception in 1932, Bashas’ has given back more than $100 million to the communities it serves. For more information, visit www.bashas.com.