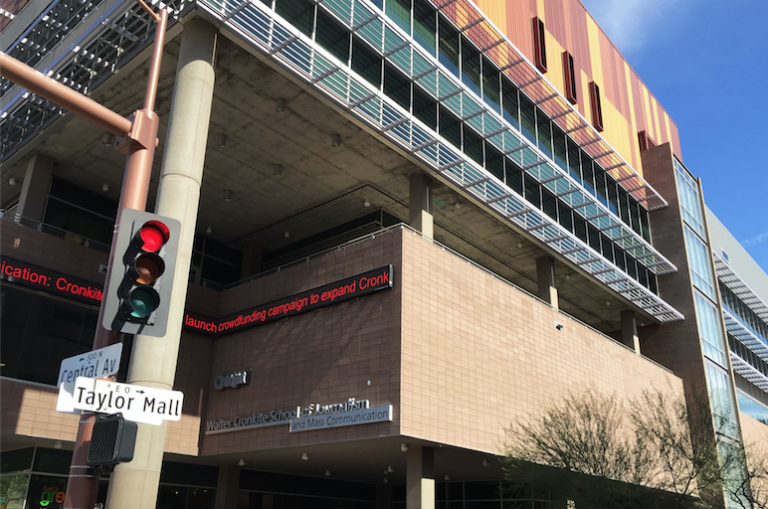 Chants of “not my president,” echoed down the main walkway of Arizona State University’s Downtown Campus yesterday evening.

These fervent students carried neon signs with huge writing that said, “Trump is Hate” and “We Are Not Deplorable.”

Protests were not limited to the Downtown campus, as 12 News reported a massive protest at the Tempe campus last evening.

With the results of the 2016 presidential election, students at Arizona State University are skeptical of the Electoral College system and its representation of the voice of the people.

The Electoral College system was established in Article II of the Constitution and amended by the 12th Amendment, in 1804.

“So rather simply trying to win the most actual votes in the country, a presidential campaign must try to put together a map of state victories that will amass more than 270 electoral votes. That’s the simplified version,” Prokop said.

Despite the outcome of the popular vote, Donald Trump won the 2016 election with 279 votes in the Electoral College. He received 51 more votes than his opponent Hillary Clinton, who finished with 228 electoral votes.

Alejandra Proctor is a senior studying health administration through the school of Health Solutions. As a California resident, she participated in the election through an absentee California ballot.

“I honestly didn’t think that Trump had any chance in hell of winning. I was watching it, and I was like, ‘well everyone doesn’t want him, but the Electoral College said they do,’ so I don’t know how that happened,” Proctor said.

“I think we’re all just used to it,” Proctor said.

She hopes that despite the election ending, people stay engaged with politics. She believes that staying in the loop puts pressure on politicians to respond within their communities.

“I’m excited to see what’s going to happen now. I hope it’s going to be what the people want, not just what they want,” Proctor said.

Some students do not even thoroughly understand the Electoral College and how the process works.

One of these students is A.J. Zueja, a junior studying community sports management.

“I don’t think I know enough about what the electoral college is to really be able to say if I think its working or not. I think it’s weird, I was kinda looking at this yesterday, when they were going over the Electoral College, and what it was and stuff, but I didn’t really catch onto it.

“I think its weird how we can be a key state, and how California has 55 electoral votes and we have 11. I don’t know, it’s weird,” Zueja said.

Despite his understanding of the Electoral College, Zueja is registered and participated in the election. He believes that if the president were decided based on popular vote, more people would go out and vote.

This is the second election in the past 20 years where the popular vote and electoral vote have not aligned.

The first step to make a change in the system is to get educated. Whether it’s about the Electoral College system, the candidates or propositions themselves, it’s up to the people to take the time to understand the political world.

“We have the tools and the ability to be more educated, but I don’t think anyone takes the time or resources to take it seriously. Even within Arizona, with props and stuff, you have to read it. Yeah it takes time, but it is there for you to become educated,” Zueja said.