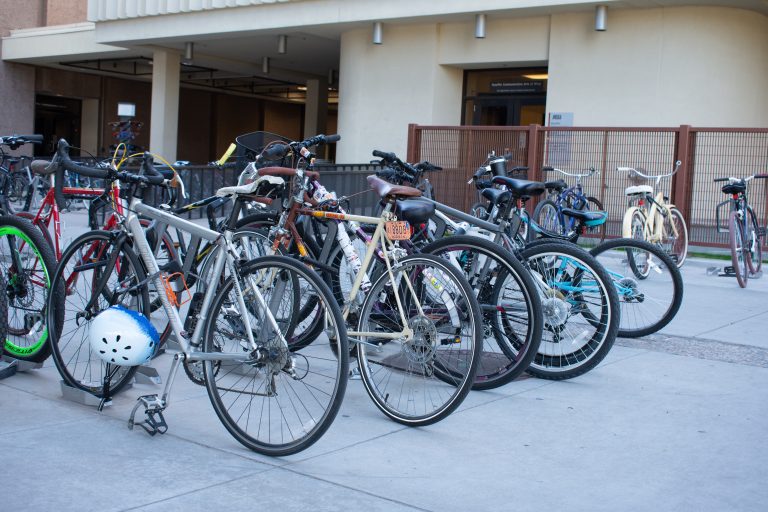 TEMPE, Ariz. – Bikes are common around big colleges campuses such as ASU. They are used by students but also some faculty and staff to get around campus.

What comes along with so many bikes are bike thieves. Bike theft is a common occurrence on college campuses and ASU is by no means a safe haven for bikes.

Kirin Munnanei, an ASU graduate student, says he uses his bike wherever he goes. Last January, Munnanei’s brand new bike was stolen within minutes of him leaving it locked outside the Walmart on campus, forcing him to buy a new one again.

“I got a new camp bike, it came in January last year,” Munnanei said. “I parked it outside Walmart, it was like 12 o’clock in the afternoon. I was not bothered or anything. I locked it and I came back outside in 10 minutes and only the wheels were still there.”

With bikes costing around an average of $250, that can be a lot for college students who are already trying to save money by using a bike.

ASU does provide many resources for students to help prevent bike theft such as registering your bike and bike valets on campus.

“ASU offers additional information on bikes at cfo.asu.edu that include safety tips and routes,” said Brenda Carrasco, police information officer for ASU PD. “There is also a service where students can register their bike’s serial numbers in the event it gets lost or stolen. This is a free service at any of the university parking and transit offices.”

Last year, the number of reported of stolen bikes at ASU was only at 73, the lowest since 2011, according to the university’s logs.

Still, ASU PD recommends that you buy cheaper bikes and use multiple locks to help lower the chance of your bike being stolen.

“It is recommended students first opt for affordable commuter bikes that won’t draw much attention to potential thieves, followed by securely locking the bikes first with a u-lock around the bike frame and then a cable lock around the front tire, frame and bike rack,” said Carrasco.

If you register your bike and report to the police after it is stolen, the police will try to track it down, but it is unlikely you’ll see it again, just like Munnanei and his bike.

But why are bikes stolen so often?

Carrasco said, “Bike thefts at universities may happen more often because there is an abundance of bikes that aren’t properly secured.”

Another likely motivation for stealing bikes – quick and easy money.

Michael Graham Richard, a journalist/blogger, detailed the reason why bikes are such a hot target for many thieves in this article.

“While a stolen bike probably isn’t that valuable, what matters is that in most places, there’s basically no chances that you will be caught,” Richard said in his article. “While thieves aren’t always the most rational people, they are rational enough to know that a low-paying risk-free crime can pay a lot if you do it enough times to compensate for the low value of each stolen booty.”

There is a lot that can be done to prevent bikes from being stolen, but at the end of the day, bike theft is not 100 percent unavoidable, especially when there is an abundance of them on campuses.

Munnanei believes there can be only so much that ASU can do to try to prevent bike theft and also find and return your bike once it is stolen.

“It’s difficult to track down stolen bikes,” Munnanei said. “Many people come to the ASU campus and roam around so it’s hard to keep track of all the people. It’s hard to go around and ask people about their bikes. It’s going to be difficult but maybe do a few steps like better secure places to park and all.”