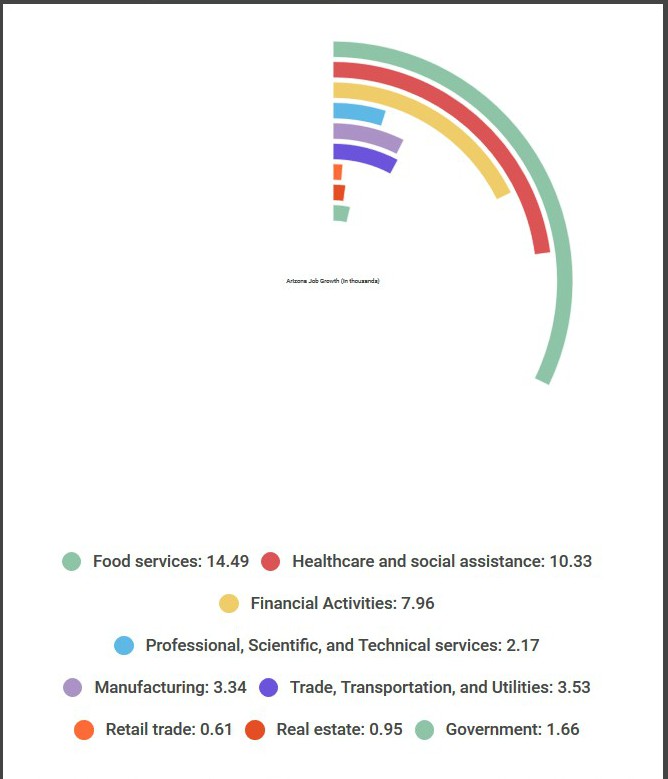 PHOENIX—Several growing industries and a rising population within Phoenix, and other metro areas, have led to Arizona outranking many other states when comparing positive job growth rates, according to Arizona State University.

Updated at the end of October 2017, the “Latest State Rankings” board created by the Seidman Research Institute at W.P Carey Business school shows Arizona ranked in the Top 15 for employment rates in nonfarm and private sectors within the state.

These rankings are compiled from the U.S. Bureau of Labor Statistics by student workers showcasing employment rates across the nation within nonagricultural sectors.

Rankings that major websites such as Politifact.com have used in verifying official claims and organizing employment data for the Tampa Bay Times.

The rankings have existed since the 1990s in newsletter form, but its digital update allows for information to be constantly updated and checked for accuracy.

When asked about possible reasons behind this ranking, McPheters says that Arizona’s population growth exceeds average population growth for many other states. More people means more workers and more consumers for businesses and their relevant industries.

McPheters notes that Phoenix accounts for almost 90 percent of new jobs within the state: a city full of new and expanding job industries.

“The largest single source of metro Phoenix new jobs this year is food services, followed by health care and finance [which make up] about one half of the 50,000 new jobs expected in 2017,” McPheters said.

Earlier this year, the Phoenix Business Journal reported on over 10 different tech-based companies that are hiring locally offering thousands of available positions: companies such as Vixxo, Upgrade Inc. and Infusionsoft.

“The Phoenix metro has ranked in the top 5 nationally for growth in tech jobs.  There is a lot of momentum in the tech industry,” said Chris Camacho, president of the Greater Phoenix Economic Council, an organization that works to develop the economic progress of Phoenix.

In recent years, this corporate expansion in Phoenix has been an important driver for industry growth and employment rates.

“Companies in Greater Phoenix are working to create and develop new technologies that change the way we live, and how we do business. From autonomous vehicles…by Waymo and Uber, to ASU working on flex electronics wearable devices, to companies like Ingenu,” Camacho said.

Camacho says a diversity of business talents and high-growth industries are driving the economic success of Arizona.

For Councilwoman Kate Gallego, who represents the downtown area, this ranking is a result of Phoenix doing its part to grow Arizona and provide jobs for citizens.

“It has been a great year for growth in Phoenix. As a member of city council, I know that we are doing our part for the city of Phoenix,” Gallego said.

Gallego says that 11,000 new permanent jobs have been brought to Phoenix through new tech business from companies and the resettlement of several corporate headquarters like RJR Technologies in the area. She supplies wage increases of 8 percent exampling that Phoenix, and Arizona, is growing faster than most of the nation.

McPheters says Arizona usually ranks in the Top 10 and the Top 15 ranking shows a minor decrease in employment for 2017.

However, Gallego does not seem worried.

“We have the ninth fastest growth rate in the nation…I believe Phoenix [and Arizona] have a bright future,” Gallego said.