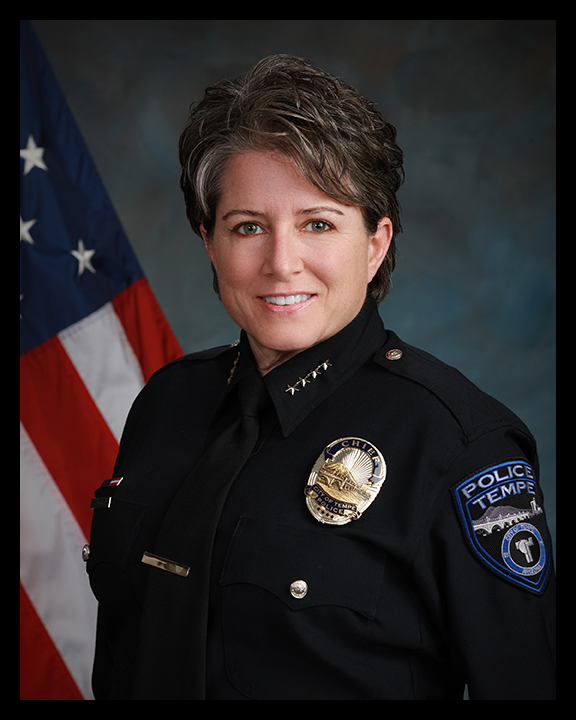 TEMPE, Arizona — Tempe Police Chief Sylvia Moir’s office is not like the movies, she’ll assure you. There’s no bottle of Johnny Walker in the desk drawer, and she doesn’t spend her days in a haze of cigar smoke demanding the badges of “loose canons.” Instead, Chief Moir says she has spent a fair amount of time settling into her new position by getting to know the people with whom she now works.

Having been chief of Tempe Police for over two months now, Moir acknowledges the challenges that come with acclimating to a police force numbering upwards of 400 officers in a city of nearly 170,000 residents— a notable departure from El Cerrito, where she oversaw a department of less than 50 officers in a town of 24,000. “I don’t know everybody’s name immediately, and that bothers me,” she says.

Whereas, in El Cerrito, Moir knew everyone in the department personally, she indicates that doing the same in Tempe has not been the easiest feat. “I want to know every employee and where they are and their history— I want to know how we can challenge them and develop them … and that’s what I’m really finding some difficulty in, personally,” she states.

However, while overseeing a larger department is challenging with regard to establishing connectivity, Chief Moir believes that it has its advantages. “In many ways,” she says, “I think it’s easier. We have varied stations where people can kind of separate physically from each other, and that is a strength. Of course it’s a challenge— to remain connected— but it’s also a strength.” She continues, stating that “Sometimes it’s harder, at a smaller agency, to be police chief … we don’t have as many people to carry out initiatives— in that way it’s harder.”

When asked about her vision for Tempe as it relates to that of her predecessor, Tom Ryff, Chief Moir’s response suggests that there is some similarity. For example, when it comes to the concept of broken windows policing— a model that some residents criticized Ryff for employing— Moir states “I think it has merit. I believe in that. Similarly, I believe addressing small behavioral things early— internally and externally— really prevents big things.”

Another issue that Chief Moir acknowledges involves past incidences of racial profiling. Recognizing the allegations that have been directed at the department, she describes some of the efforts she believes have been made to improve in that area. “One of the changes [the department] implemented is the introduction of Fair and Impartial Policing training. It brought in national and international experts to train personnel in Tempe, with a proven model of Fair and Impartial Policing— we’ve trained trainers and command staff, and now we are rolling it out to the rest of the agency. And I think that is a signal; it’s a signal that if there was systemic racial profiling in the police department, we are doing what we can to eradicate it, to address it.”

“That’s one lane of travel to address that scrutiny,” she continues. “The other lane of travel is, we are embarking on a really robust program to address all of the recommendations in the President’s Task Force on 21st Century Policing. We’re looking at all of the recommendations, we are examining internally each of those recommendations. That’s the second lane, fair and impartial policing being the first, 21st Century Policing being that middle lane, and then this outside lane, kind of visualizing it, is real engagement in procedural justice.”

“Procedural justice,” Moir explains, “argues that people are less concerned with the outcome, like a citation, and more concerned with how they were  treated fairly and impartially and with dignity and respect during the encounter,” she says, adding, “we can only achieve that externally if we can achieve it internally, so we are giving our employees voice, we are transparent in our decision making, and employees are part of the decision-making process.”

At two months in, Chief Moir describes some of the perspective she has gained in her new position. “I’ve gained a lot of understanding and knowledge of where we’ve been, where we are, and where we want to go— this really compelling and aspirational future,” she says.

As for what that future holds, Moir says, “I want to create a special events unit to increase and strengthen our special event prep.” She also plans to increase growth within the department by adding sworn and professional staff.  “I don’t want to just grow to grow,” she says. “I want to grow in a smart way with smart practices and a strategic plan aligned with where we need to be and aligned with city goals.”

Chief Moir finishes up the conversation by summing up her outlook on her new home: “Tempe’s great. It’s a great community; it’s so cool to live here and work here,” she states, adding, “I choose to live here, I choose to police here, and I choose to add value to the community in the way that I can.”