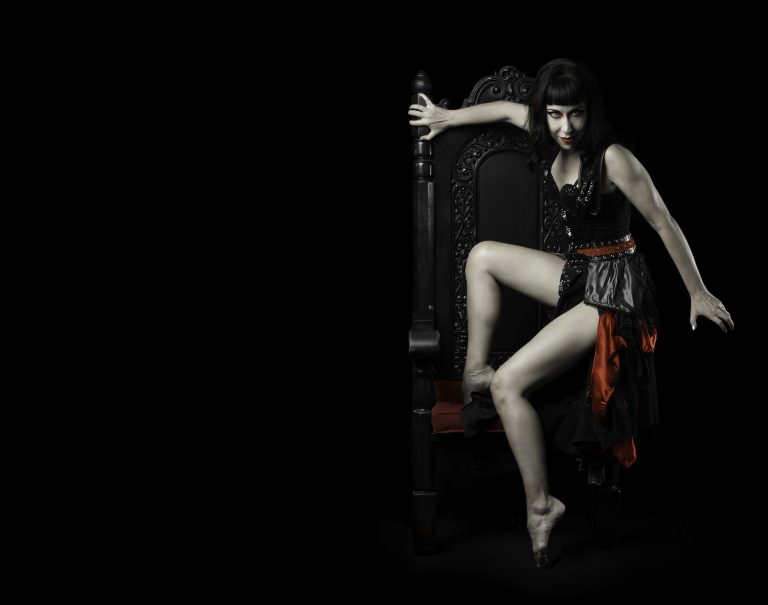 This fall season, from October 4-13, 2018, Scorpius Dance Theatre presents its popular production, A Vampire Tale. Dubbed “’The ‘Nutcracker’ of Halloween,” the yearly haunt is celebrating its 15th anniversary season. Longtime fans won’t want to miss this year’s show, as lead cast members Nicole Olson and Gavin Sisson, who play the Queen and King, will be dancing their farewell performances in A Vampire Tale.

According to Choreographer, Lisa Starry, “This year’s production of A Vampire Tale is very bittersweet. I’m so excited to have reached a milestone anniversary for the show. However, with Nicole and Gavin dancing their final season in the show, the milestone also has so many other meanings. I am forever grateful for their contribution to the show and for our fans who have continued supporting us every year.”

A Vampire Tale indulges audiences with all the trimmings: dark and sexy drama, quirky and comedic episodes, and visually stunning dance and aerial feats. This popular, sell-out production pre-dates all of the vampire pop-culture and evolves annually to keep fans coming back for more.In the plot line of A Vampire Tale, a young woman is drawn to the dark side and finds herself lured into an assorted band of bloodsuckers. Frightened yet fascinated by their shadowy showmanship and seductive moves, the girl struggles to avoid becoming part of their underworld when she becomes infatuated with the King vampire.

Longtime Scorpius Dance Theatre dancer, Martha Hernandez, will return for the third year in the role of the Innocent. Making a guest appearance for the third year in a row, Louis Farber will play the side-splitting narrator role of Strange Man. Farber is a well-known Valley actor and director, as well as the associate artistic director for Stray Cat Theatre. A Vampire Tale’s original soundtrack is composed by local musician, Kristofer Hill.