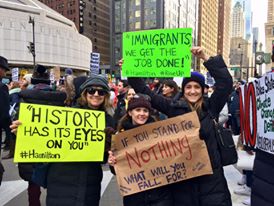 [TEMPE, AZ] – Today, Tempe City Councilmember Lauren Kuby and Tucson City Councilmember Regina Romero joined a national letter from local elected officials to President Obama calling on him to protect hundreds of thousands of immigrant families by issuing a pardon for lawfully present immigrants with years-old or low-level criminal offenses. The letter is signed by 60 local elected officials. It kicks off a week where the President’s legacy on immigration will be at stake, with confirmation hearings and a national day of action that will highlight his record of both deportation and protection, and potentially show just how much could be dismantled by the incoming administration.

The White House has rejected previous calls for pardons for undocumented immigrants, asserting that a pardon cannot be used to grant people lawful immigration status. However, for legally present immigrants who already have status, but who face the risk of deportation based on minor and old convictions, a presidential pardon could provide durable protection against deportation that could not be undone by any future president.

Many of those who would be affected by the pardon were convicted of minor offenses, such as jumping a turnstile. In many cases, the offenses occurred decades ago. The letter joins Local Progress members with over 100 immigrant rights groups who made the same request to the President late last month. Forgiving all immigration consequences of convictions would guarantee that individuals can stay with their families and in their communities.

As local elected officials, the signers of this letter see the impacts of a broken immigration system up close and in their communities, every day. Indeed, localities are often forced to deal with the consequences of deportation, be it on a family, business, child or broader neighborhood.

“If the President acts,” said Kuby, “as many as 200,000 legal, permanent residents would be relieved of the threat of deportation, leading to greater security for our families in these uncertain times.”

There is significant historical precedent for this type of presidential pardon. Categorical pardons have been used to grant clemency to broad classes of people in the past by Presidents ranging from Lincoln to Carter, the latter of whom issued a pardon to approximately half a million men who had broken draft laws to avoid serving in the Vietnam War.

Local Progress is a network of progressive local elected officials from around the country united by our shared commitment to equal justice under law, shared prosperity, sustainable and livable cities, and good government that serves the public interest. Local Progress is staffed by the Center for Popular Democracy.