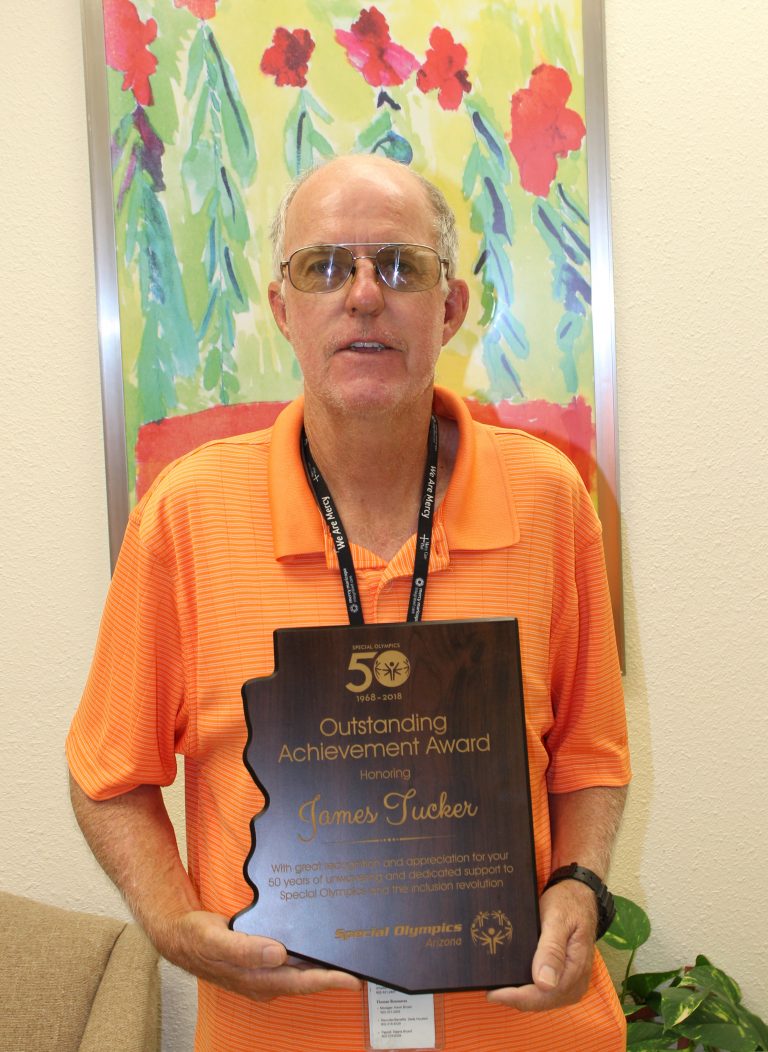 Phoenix, Arizona (November 9, 2018) – As we celebrate the 50th anniversary of Special Olympics, VALLEYLIFE Employment Specialist, James Tucker (JT) also celebrates his 50th year participating in Special Olympics. In 1968, at just nine years old, JT started his Special Olympics career in Jacksonville, Mississippi. That year, he won a gold medal in track and field. He was then sent to compete in the first ever Special Olympics World Games, which were held at Soldier Field in Chicago, Illinois.

Although JT did not show expression on his face, he was very excited to win first place in the 50 meter dash at the World Games. He still remembers the proud look on his parents’ faces when he won. For the first time, JT felt like he was the best at something and truly felt he belonged. Back in Mississippi, JT continued to participate in the Special Olympics and won many medals and trophies for his efforts.

In 1975, JT’s family decided to relocate to Phoenix, Arizona. JT immediately signed up with Special Olympics Arizona and met a man that would greatly influence his life. Coach Dan Cummiskey worked with JT and instilled in him to “Never give up on himself.” Coach Dan played a strong role in JT’s life as a coach, mentor, tutor and friend. He still thinks about Coach Dan whenever he runs.  JT followed Coach Dan’s lead and became a Special Olympics coach. JT also became a member of the Special Olympics Board of Directors in 2011. In his free time, JT volunteers at many organizations setting up Special Olympics practices and showing the organizations how they can improve their Special Olympics programs. He strives to be a good role model and mentor to athletes of all ages.

JT received many accolades in his Special Olympics career. In 1978, JT set a record time of 4.57 for the one mile run while competing in track and field. That same year he also earned three bowling trophies. Throughout his career, JT also earned medals and/or trophies in cycling, golf, tennis, swimming, basketball, skiing, ice skating, softball, shot put, high jump, long jump and various other running events. He has earned over 200 trophies and 300 ribbons.

JT has been working at VALLEYLIFE for the past 14 years. He currently works for the Vocational Program at VALLEYLIFE’s main campus. JT oversees Members working in the Production Center. He also spends time leading a group of VALLEYLIFE Members in a Supported Employment program, which provides janitorial services to VALLEYLIFE’s main campus buildings. JT enjoys his position. As an Employment Specialist, he works with individuals with disabilities to overcome their obstacles for gainful employment. He enjoys being an influence in the Member’s lives and watching their skills develop and grow.

VALLEYLIFE provides Residential Services, Day Services, Home and Community Based Services, and Vocational Services to people with disabilities. Founded in 1947, VALLEYLIFE has been serving the greater Phoenix area for over 70 years.