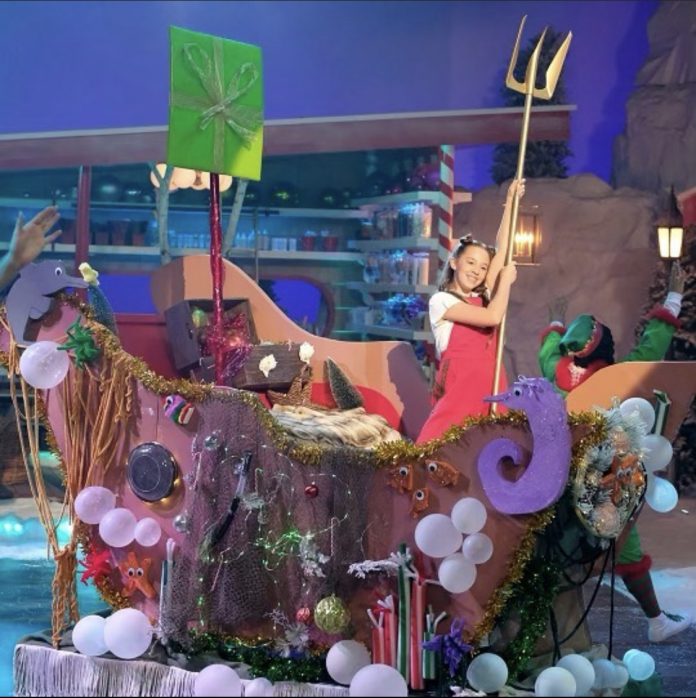 Kidpreneur and seventh grader at Arizona School for the Arts, Bali Bare — inventor of the patented product, the Octopurse — was selected by Santa and Ms. Jingles as one of the seven “elf-testants” to go to the North Pole and compete in Nickelodeon’s show, Top Elf.

As winner of the competition, Bali won a trip to the Nickelodeon resort in Punta Cana and received $25,000 to a charity on her Wish List, which she donates to Miracle League of Arizona, where her brother and cousin, both with special needs, play baseball. The nonprofit provides a fun, safe and adaptive baseball experience for individuals with disabilities or special health care needs.

The elf-testants participated in a variety of holiday-themed challenges and were judged on the “four virtues of elfhood,” including creativity, design, building, and holiday cheer. The tasks entailed building a life size countdown calendar, designing sweet treat carts for the North Pole street fair, reimagining Santa’s style for a high-tech makeover, creating a scenic 3D pop-up experience and producing and starring in their very own holiday-themed music video. In most of her projects, Bali would integrate her favorite parts of Arizona, which consistently wowed the judges and helped her become Santa’s Top Elf.

In the final episode, that aired on December 17, the elf-testants created and starred in their own holiday inspired music video. And with being part of the AZ Idols Superstars, where Bali sings and dances, the final challenge was right up her alley. She was given the theme “under the sea,” and turned Santa’s sleigh into a sunken ship for her video. Bali won the judges hearts and was crowned with the ultimate title of “Top Elf”.

For more information on Bali Bare, visit balibare.com and follow her on Instagram to see what she is up to next.

Nickelodeon, now in its 41st year, is the number-one entertainment brand for kids. It has built a diverse, global business by putting kids first in everything it does. The brand includes television programming and production in the United States and around the world, plus consumer products, digital, location based experiences, publishing and feature films. For more information or artwork, visit http://www.nickpress.com. Nickelodeon and all related titles, characters and logos are trademarks of ViacomCBS Inc. (Nasdaq: VIACA, VIAC).

Storytime at The Quarter