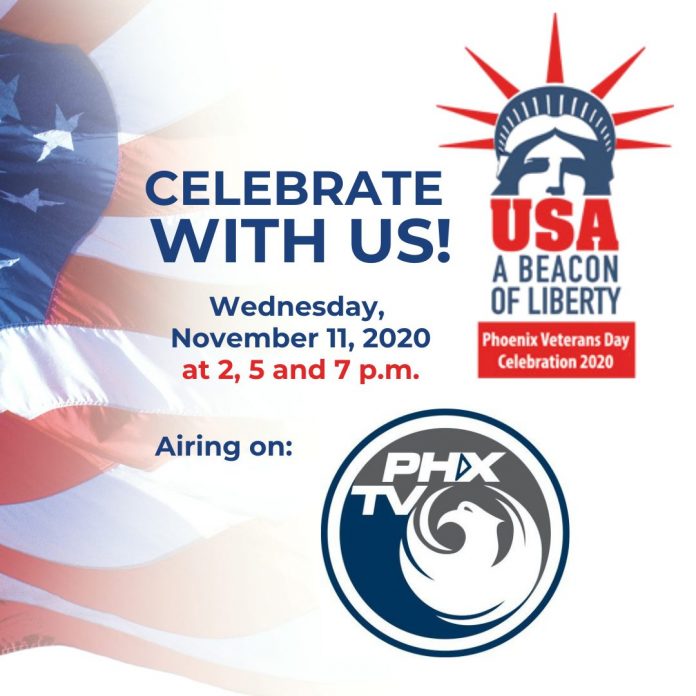 Glowing with tributes to our nation’s true heroes, Honoring Americas Veterans will present the 2020 Phoenix Veterans Day Celebration. This year’s theme is “The USA, A Beacon of Liberty.” Due to the worldwide pandemic, the in-person parade will be a Livestream event.

The show will feature interviews with seven Honor Our Heroes awardees, including:

· Thomas Kirk – Vietnam War Honoree, U.S. Air Force (Anthem): Kirk was a fighter pilot who became a Prisoner of War. After his release, he continued serving on active duty before his retirement in 1978.

· Aaron Dudney – Somalia Conflict Honoree, U.S. Army (Litchfield Park): During his Army career as an Airborne Ranger, one of his most significant accomplishments was leading a communications team into Somalia to support Operation Restore Hope.

Along with four High School Essay Winners, including:

· Gowri Shankar Biju, 9th Grade, Hamilton High School, Chandler, AZ. He writes, “As a country, our history of conflicts has always been about defending the rights we cherish. From the Revolutionary War, where Patrick Henry famously declared, “Give me liberty or give me death!” to World War II, we have broadcasted a message of tolerance and freedom through our brave and resilient military.”

· Paula Hortig, Grade 10, Casteel High School, Queen Creek, AZ. Hortig is a German exchange student who writes, “America – a beacon of hope and freedom. That’s what everyone thinks about the United States back in Germany. The fact that America is the country of independence influenced me a lot when I decided to spend one year here. I wanted to see what it was like to live in a country where everything was possible.”

· Xoshill Saldana, Grade 11, Betty H. Fairfax High School, Laveen, AZ. She writes, “America, a land of triumph and liberty. It is the land of the free and the land of opportunities for every individual. Our nation is exemplified by our military, which is a reflection of our people. We may not be perfect, but we are a diverse group of citizens willing to risk it all for our country and our home. Our military stands ready to risk their lives to give their people a better nation that is united with grit and independence.”

· Dianette Molina, 12th Grade, Coronado High School, Scottsdale, AZ, She writes, “America was built upon the words of Thomas Jefferson: “We hold these truths to be self-evident: that all men are created equal; that they are endowed by their Creator with certain inalienable rights; that among these are life, liberty, and the pursuit of happiness.” America shines through its strength and emphasizes its diversity. Our nation is a beacon of light for its freedoms, opportunities, and its citizens.”

“The men and women who serve in our military face many unique challenges, and when they return, they are a source of pride for us. We can never repay them for their service and sacrifice, so having an event, like this, shows the gratitude we have as a community for them.,” says Brian Ishmael, HAV president.

Media, please note: Photos and bios, and other information is available online at www.honoringamericasveterans.org.