The vaping epidemic that is taking over the nation is impacting students in Arizona schools.

due to e-cigarette usage.

related to e-cigarette use have Arizona school officials concerned.

“I am very concerned about the increased use of vaping, not just in our schools but in our

In 2017 Centers For Disease Control reported that the number of high schoolers in Arizona who were using e-cigarettes was 3% above the national average, which was 13.2%. That national average has now increased drastically to 30%.

getting themselves off that addiction,” Claire Yardley, 17, said. Yardley attends Chaparral High

According to the Arizona Department of Health Services, more than twice the amount of

e-cigarettes, according to the CDC.

Dr. Clarence Addo, who specializes in oncology, said that doctors weren’t exactly sure what was

causing the “respiratory illness, infection, and lung failure” in those who have been hospitalized

due to the lack of knowledge about vaping.

“I always knew that vaping was harmful, but I didn’t realize how severe those consequences

could be until I heard all these stories about kids getting hospitalized,” Yardley said.

produces an inhalable aerosol. The fluids that are used with these devices can also contain

“The number of hospitalizations we’ve seen has been avoidable,” Addo said, “but the un-

regulation of vape products went on for too long.”

In recent cases of hospitalization, unregulated chemicals in vape pens have been the culprit.

These devices can cause a plethora of long-term health problems in young adults, such as

The more hospitalizations that are reported, the more Arizonans want to take action.

leaders about what we can do to reduce vaping in our schools,” Hoffman said.

Most schools already have small steps in place to stop students from vaping while at school.

The community of Goodyear is one of the few trying to take a stand.

Although there is still a long way to go, the progress that is being made can save Arizona youth

from severe illness and avoid the epidemic that is sweeping the nation. 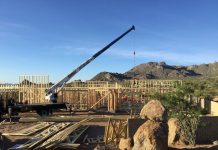