The presence of plant-based food and drink is rising in popularity after quietly sitting in the back of the retail food market for decades.

A recent change in consumer behavior has brought a sudden increase in demand for these products. Whether it be for health reasons, change in taste, or simply to try something new, plant-based food and drink are becoming more widely available and consumed, including in communities in the West Valley

A few years back, the most popular milk alternative found in stores was almond milk, but today, it is being overshadowed by the several others that are gaining popularity, such as coconut, oat, and even rice milk.

There are also now more options to pick from for plant-based alternatives that directly replace meals, especially with the rise of brands such as Beyond Meat and MorningStar Farms.

This change in the market has been slowly increasing over the past decade, especially in the past few years.

The worth of the U.S. plant-based food market in 2017 was at $3.4 billion and has now reached $4.5 billion, marking a 31% increase, according to data from SPINS, a provider of data and insights for the natural, organic and specialty products industry.

Amanda Hudspeth, an Avondale resident who has been vegetarian for four years and who hopes to become vegan, says that living a plant-based lifestyle hasn’t been easy, but the increase in products that fit her diet has made her feel less limited to what she can eat.

“It’s so calming and reassuring whenever there’s vegetarian and vegan options because then I don’t have to go through the awkwardness of asking for a substitute in my meal,” Hudspeth said. “It’s really inclusive, and I feel like personally thanking the restaurant or grocery store whenever I see they have vegetarian or vegan options.”

Besides the increase in retail value for plant-based products, the number of vegan restaurants around the country has also begun to increase, jumping from about 55 restaurants 20 years ago, to more than 660 today, according to the Vegetarian Resource Group.

A city that is becoming a hot spot for vegan food is downtown Glendale in the West Valley, where the number of plant-based food options have been limited in the past.

In 2018, Arizona’s first all vegan-supermarket, Veggie Rebellion, opened its doors in Glendale. Though it was only opened for one year due to financial trouble, it created a pathway for more vegan restaurants to open up in the area, such as Mi Vegana Madre, a vegan-based Mexican restaurant, and Casa Terra, Glendale’s first fine dining vegan restaurant.

Jason Wyrick, owner of Casa Terra and renowned chef who owns his own vegan delivery service, The Vegan Taste, says that he has been serving the plant-based community for 15 years and has definitely seen a shift in attitude toward vegan food in recent years.

He says that ever since he moved to Glendale in 2004, him and his family always wanted a vegan restaurant around, but never got one, so he decided to open his own.

He has hope that non-vegan restaurants in the West Valley will step up and began incorporating vegan sections into their menus as a way to serve the community.

“I think what is going to happen in the West Valley is that a lot of more non-vegan restaurants are going to have specifically vegan menus,” Wyrick said. “The community here seems to celebrate those as much as a straight vegan restaurant.”

Fast food restaurants have already started to do this as places such as Burger King now offer the Impossible Burger and Dunkin Donuts has launched the Beyond Sausage Sandwich recently.

This exposure to more plant-based options in stores allows people to try something new, a possible reason for why this trend is happening right now.

Lisa Dowd, who is the owner of the Glendale coffee shop, A Shot of Java, says she makes sure her shop serves a variety of dairy-free milk alternatives and vegan pastries as she has seen an increased desire from customers to have these readily available to them.

Another reason for this current trend could be accredited to the documentaries released in past years that showcase what goes on behind closed doors in the animal industry, such as Cowspiracy which was released in 2014.

Hudspeth says that the call-for-action that documentaries show has driven people like herself to take steps in the plant-based food direction, even if they don’t completely turn vegan and vegetarian right away.

“More people are becoming aware of the horrible truth of the dairy industry and how bad cow milk and meat is for you,” Hudspeth said. “Documentaries are showcasing the truths and the statistics about how eating [a plant-based diet] could help save our planet.”’

The retail market forecast predicts that plant-based food and drink are here to stay. According to a study done by MarketsandMarkets, the 2019 plant-based market figure of $4.5 billion will increase to $6.43 billion by 2023. 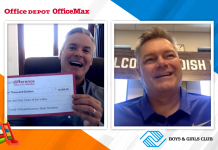