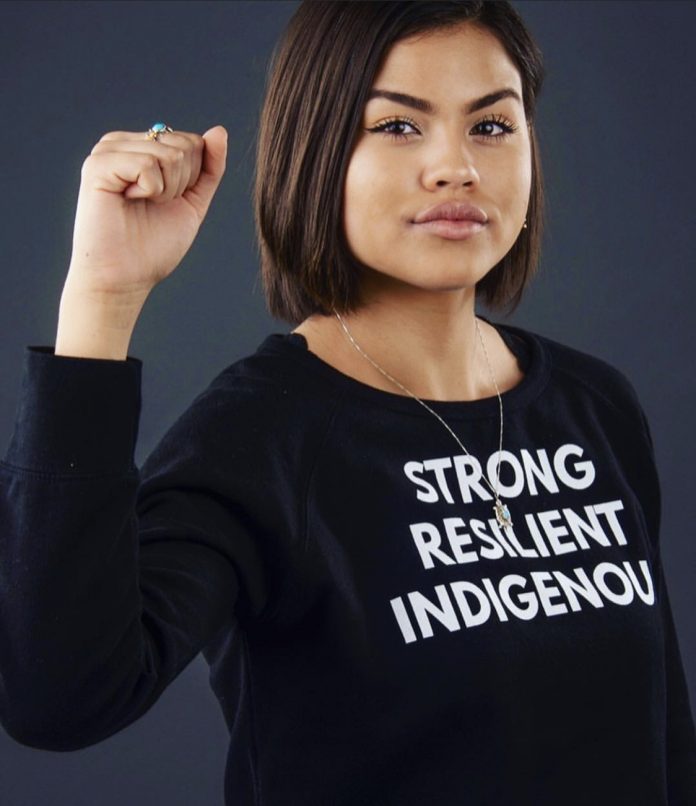 Pereira was in leadership positions in various Native American organizations and clubs throughout high school and was extremely involved in the community as an activist.

“I think she’s great in the community and her heritage… She was all over the news fighting for what she believed in,” said Lourdes’ former basketball coach, Coach Izzy. “She was very vocal and didn’t shy away when she was questioned.”

Before Pereira started ASU in the fall, she immediately reached out to Native American organizations and clubs to continue her passion and efforts to represent her heritage during her college career.

Fighting for Native rights and recognition may just be in Pereia’s blood. Her great-grandmother instilled the awareness of tragedy and losses within their tribe, Hia-Ced O’odham, to Pereia’s mother. After her great-grandmother’s death Pereia’s mother, Christina Andrews, took the initiative to look within their tribe in order to make progress, get their land back, and be federally recognized. Growing up, Pereira witnessed her mother make great changes within the Native community, but also face tribulation and trial from those that disagreed with her efforts.

“While this was all going on I was 12. So I heard the stories and I saw the impact it had on my mother. And so for me, that’s kind of what started it,” said Pereria. “My mom’s my inspiration. Seeing her struggles and her fight throughout this, that’s what really pushed me. And she’s still fighting for everything… She’s a big inspiration for me, so I’m trying to follow in her footsteps and fill in those shoes, but they’re super big.”

Pereia is the only child out of her 10 siblings that have taken the role of a Native American activist. Because of this, Pereia finds it difficult sometimes to be understood or supported by her siblings. They do, however, ask questions and are willing to learn more about their heritage from their sister.

“You’re gonna go through life when you have a certain stance on an issue and people aren’t going to agree with you. But when it’s your own family it kind of takes a hit at you,” said Pereia. “But that’s how strong you have to be if you want to be an activist. You have to know your morals and where you stand, even if it’s the closest people to you, you can’t just follow their perspective or what they want.”

“Lourdes is such a strong role model for so many youths out there who can look up towards her when making a movement,” said Steven Robles former Co-President of Tucson Native Youth Council. “She holds a passion in her that can change people’s perspective on something into something outstanding.”

Followers of Pereira’s social media, see her post daily about Native culture and heritage to spread awareness and cultural sensitivity.

Pereia believes it’s a constant fight to not only learn about their own heritage and history but to spread that knowledge and recognition. Pereia lists the difficulties of being native: the statistics, the social issues, the ignorance, the controversy of mascots and costumes and representation, not being in history, the fight for acknowledgment. It is all exhausting to Pereia.

“I think being Native, it’s beautiful. The culture is amazing, but it’s exhausting that we always have to fight the stereotypes,” said Pereira. “But, hell yeah the work is worth it.”

Hearing stories from other Native tribes and the tribulations they’ve gone through or currently still go through, inspires Pereia to continue being a voice for Native Americans. Although the fight is constant and tiring, Pereia wishes to create a change. Whether it’s just speaking to one person and educating them or creating policies and bills, Pereia is set on her purpose to create change.

“What I truly achieved from her knowledge was to always remember where you come from even if you didn’t grow up within that background to keep fighting for what’s right within your beliefs,” said Robles.