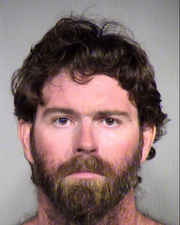 Tyrel Applebee, 34, pleaded guilty to 34 counts Thursday, ranging from sexual conduct with a minor to attempted molestation of a child after being arrested on August 4, 2018, when his wife, who shall not be named to protect the victim’s identity, called the police after witnessing him grab his step-daughter’s body inappropriately, according to the police report. All but four of the counts, two counts of molestation of a child and two counts of sexual conduct with a minor, were dismissed per the plea deal.

“That this disgusting person had the nerve to call what he did to my daughter ‘consensual,’” the victim’s father, who will not be named to protect the victim’s identity, said. “As a father himself with girls the same age, I wonder how he would feel a man four times their age did these so-called consensual acts.”

As these words came from his pained voice the young girl continued to sit with her mother and court-provided yellow lab, looking down. With the case not going to trial per Applebee’s plea, the victim did not directly address the court, except through Joanna Zigler, who gave the victims statement on her behalf.

“What I want to say is, I love seeing you in this position. You deserve whatever you get,” Zigler said on the victim’s behalf. “You took away nearly half of my childhood, the only good thing from you were your daughters. You took them away from me and my family. So, you go away knowing the last words I say to you ‘I hate you.’”

In his own statement during the sentencing, Applebee offered only remorse and a cry for forgiveness.

“I am sorry for what I have put my family, friends and all those that I love and trust in me for all those years, I failed you all and will pay dearly for this selfish, reckless crime,” Applebee said. “I hope and wish, from the bottom of my heart, that with some time you can try to find it in you to forgive me for all of this. I wish only the best for you to go on, to become the person you wish to be.”

To further add to the mitigations of Applebee’s sentence, his mother, Dinah Darcell, testified on his behalf, after her and several other members of his family arrived late to the courtroom.

“Tyrel is the oldest of my three sons, I never saw anything in life that I would have questioned regarding his behavior, in fact he is known to be a man with a big heart. I do think he is guilty of making a series of bad decisions, I just wish he reached out for help,” Darcell said.

Both Darcell and Applebee’s defense attorney, Melvin McDonald, said to Judge Granville that they felt the agreed upon 30 years from the plea deal was too severe a punishment for someone that showed as much remorse as they said Applebee did.

Judge Granville said that Applebee’s willingness to avoid forcing the victim to endure a trial by taking the plea deal did apply to the mitigating factors of his sentence, but the aggressors outweighed it.

“Mr. Applebee, I guess they put me in the middle metaphorically as well as physically because when I look at the room and everything folks have believed about you on the left side is correct and everything folks say about you on the right side is also correct. Which means you have a terribly dark side that brought us here,” Judge Granville said. “I do find as an aggravating factor the fact that the repeated nature of these acts, I do find as an aggravating factor the terrible breach in trust that went on.”

Holiday Magic is ON with Ballet Arizona’s Digital ‘Nutcracker Suite’