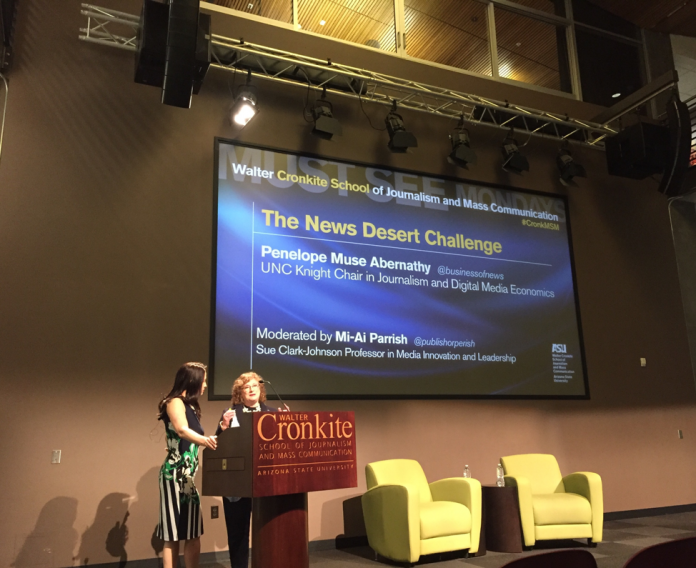 News is what brings a community together, but what happens when the public loses the news at a local level?  An abundance of “news deserts” provides an opportunity for innovation for failing local news outlets according to the Knight Chair in Journalism and Digital Media Economics at the University of North Carolina.

“If you have a publisher and an owner that is both innovative and disciplined as an entrepreneur they will share three characteristics …they will invest in their human capital…they understand that there’s not going to be one model that works for all news outlets…they take the long term view” said Penelope Muse Abernathy.

Abernathy has done extensive research for over a decade on her most recent report that came out in 2018 ,“The Expanding News Desert”, and the effects the decline of newspapers has on a local and national population. Abernathy spoke at the Must See Monday event at the Walter Cronkite School of Journalism to enlighten students, faculty, and the public on her years of research.

Often times local newspapers have quality journalists, but are lacking the strong business model and innovation that it takes for readers to stay engaged and newspaper business’s to continue to run . Abernathy illustrated an example of this to back up her point.

“You look at what’s happening in Colorado with the Denver Post. We basically had a group of those reporters that say we’ve had enough. One of the things I’ve been trying to do is work with foundations. One of the foundations there said we’ve got good journalists in here, what these people do not have is a business model,” said Abernathy.

Abernathy focused on the idea that local news outlets provide the inside perspective of what a national news story can’t have. A trending way of accomplishing such a task is in partnerships.

One start-up digital magazine, Scalawag, partnered with a small weekly in Columbus County to do an extensive piece on the opioid crisis(https://www.scalawagmagazine.org/2017/12/blue-in-columbus-county-2/). Abernathy said the writer was able to illustrate the opioid crisis not only on a national level, but a regional level. The article brought out local hospitals to do some charity work in the area in efforts to help the opioid crisis.

“I think we often think of news in the broad national sense, but really a lot of where news coverage impact comes from is in the local communities where a lot of the daily work is being done. I think that it really doesn’t get enough credit,” said attendee Sabine Galvis.

“Local issues tend to have more of an impact individually on that local area rather than national things do on local areas.” Said another attendee Michael Patton.

With the help of technology readers are able to access an unlimited amount of information on a national level. What the readers are missing, according to Abernathy , is the news that feeds our democracy. This type of news provides information on where to vote, who to vote for, and why an issue is occurring in a regional area.

“If you’re not getting that information than you don’t know what’s going on,” said another attendee Hailey Rein, “being informed is a big part in being active in your community.”

Rein portrayed her difficulties in locating information on the recent voting season. “Trying to find people beyond just the governor was really hard. How can I make an educated decision on something if no one reports on what’s going on?” said Rein.