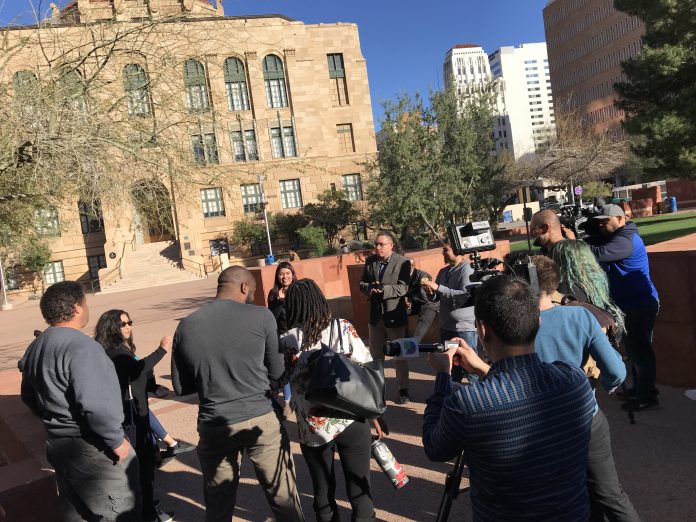 Phoenix, the fifth largest city saw a rise in police shootings in 2018. Wednesday afternoon, the Phoenix City Council approved $5 million toward body cameras for Phoenix officers and the SWAT team.

The city council motioned this measure with a 7-1 approval rate with Vice Mayor Jim Waring as the one opposing vote without comment. According to the ordinance, the contract is in coordination with Axon Enterprise, Inc. and will provide over 2,000 body-worn cameras that include software and data storage. The cost of this collaboration will warrant a total of $16.7 million through 2023. This will also add 21 regular positions to the police department on top of the already existing nine positions in order to support the program.

Executive Assistant Chief Michael Kurtenbach of Phoenix Police Department wrote the policy to enforce body-camera measures. The program will feature redaction technology which Kurtenbach said will blur out individuals faces and provide the context of the footage.

“I want to be clear as we watched the evolution of this technology over time we went from locally hosting of all the video and having to through some very rudimentary means redact that video, which shoots at a framerate of 30 frames per second to provide context, to where we are at today, with the redaction tool, if we’re approved, will allow us more expediently to blur out, if video, or to redact audio that is imprudent for release so we can prepare case files more quickly, so those cases can move along and so we can properly process public record requests,” Kurtenbach said.

Citizens were concerned about the council enforcing a strict policy on this ordinance. Parris Wallace, a member of the group “Poder in Action,” a group “which is led by organizers who began as volunteers within the organization and created programs based on their personal experience with injustice in the immigration, criminal justice, and education systems,” according to their website.

“There must be a strong policy and disciplinary measures in place to truly be a step forward without strong body camera policies in place this will just be a waste of over $5 million and will let the Phoenix police get away providing a false sense of security and transparency. We expect all council members to demand a strict policy for the community to see this is truly a step in the right direction,” Wallace said.

Wallace outlined steps to the council to ensure that the policy will maintain a strict regimen. These steps require all officers, including the SWAT team, to consistently wear body-cameras, camera footage to be released 48 hours after an incident to the family of the victim and officers to verbally state when they are turning off their cameras.

Both the citizens and Councilwoman Vania Guevara expressed their concerns on the possibility of officers turning their cameras off.

“We have auto-activation as one of the main features in the system. You don’t have to worry about officers turning cameras off or on because of auto-activation features,” said Phoenix Police Chief Jeri Williams.

Kurtenbach said context to the use of having body-cameras run at all times by giving specific times when officers will not be required to have the recording.

“The camera would not be on at all times; the officer would have the opportunity for a lunch break or go to the bathroom. The policy specifies when the cameras will be on,” Kurtenbach said.

Senior Pastor Rev. Reginald D. Walton was one of the citizens commenting on this ordinance. He said he supported the ordinance with its specific measurements to ensure safety in the city.

“One of the goals of the community police trust initiative is to build trust in the community and so today you have the opportunity to build the bridge of trust between law enforcement and community by passing this,” Walton said.

Storytime at The Quarter