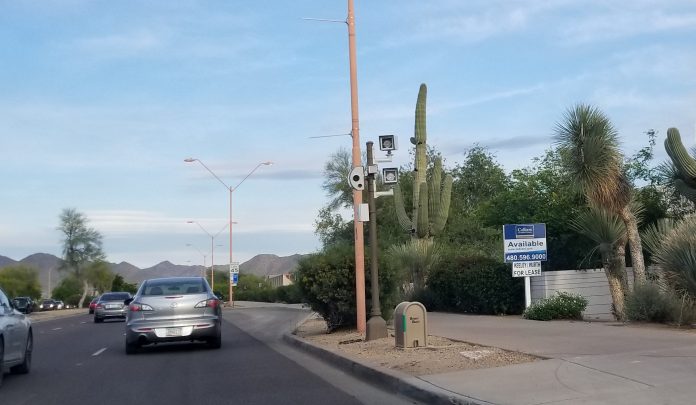 In an ongoing effort to reduce car accidents and car crash fatalities, Peoria and Paradise Valley were the first two communities in the U.S. to implement speed cameras in 1987 compared to 142 communities in 14 states in 2017.

According to a memo provided by Lee Engineering outlining a statistical analysis of photo enforcement in Scottsdale, the city has been using photo enforcement technology since 1996. These efforts have been an effective means to reduce car crash fatalities and accidents with statistically significant reductions in areas tracked around Scottsdale.

“Recently we looked at our systems because we signed a new contract with our vendor and we had traffic engineering doing analysis of all the intersections in Scottsdale,” Alex Ristuccia, Police Traffic Program Supervisor of the Scottsdale Police Department said. “Obviously, there’s no reason to put twelve cameras all right next to each other. It’s best to have them more spread out to improve safety throughout the whole city.”

The City of Scottsdale receives their traffic enforcement red-light and speeding cameras from Verra Mobility, a company that focuses on safe cities, smart roadways and the connected systems that tie them together.

Charles Territo, a senior vice president of sales with Verra Mobility, said traffic cameras are a way for cities and municipalities to change driver behavior without having to expend significant resources on traffic enforcement.

“There’s no question that there is a component of the cameras that involves enforcing fines or violation, but the end result of that is a change in driver behavior,” Territo said. “Everywhere we have the cameras, fewer red lights are run, speeds are slow down and school bus stop violations decrease.”

Territo said the cameras are not entirely meant to catch drivers performing illegal action on the road, but that the cameras act as an added layer of safety for drivers.

“Just like a sign in front of your house that says this house is protected by a security system, it might not guarantee that your house is going to get robbed, but there’s a good chance it’s not going to be.”

An independent nonprofit known as the Insurance Institute for Highway Safety (IIHS), fully funded by auto insurance companies, has conducted research related to highway safety and other speed prevention techniques one of which study said that in 2015, an estimated 137,000 people were injured in red light running crashes.

According to IIHS, 19 intersections that did not have red light cameras in four states found a violation rate of 3.2 per hour per intersection.

Wen Hu, a senior research transportation engineer with IIHS, said they have a red-light running page which is maintained and updated every year including almost all the information gathered.

“We publish most statistics, the numbers regarding red-light running and then we summarize our most recent research red-light cameras and speed cameras,” Hu said.

For the police department, the studies showing red-light and speeding cameras effectiveness also contribute to the need for finding out what locations are best to place the cameras according to Ristuccia.

“Obviously, there’s no reason to put twelve cameras all right next to each other. It’s best to have them more spread out to improve safety throughout the whole city,” Ristuccia said.

Ristuccia said the decision for cameras in specific areas is entirely reliant on database selection and an algorithm that gives the best possible spots for cameras.

“We get way more input about people who want them in their neighborhood or are supportive of that,” Ristuccia said.

“There’s always going to be a subset of the population who’s going to be angry that the government is enforcing laws, but if you take away that one or two percent of people, overall, we see very positive support.”