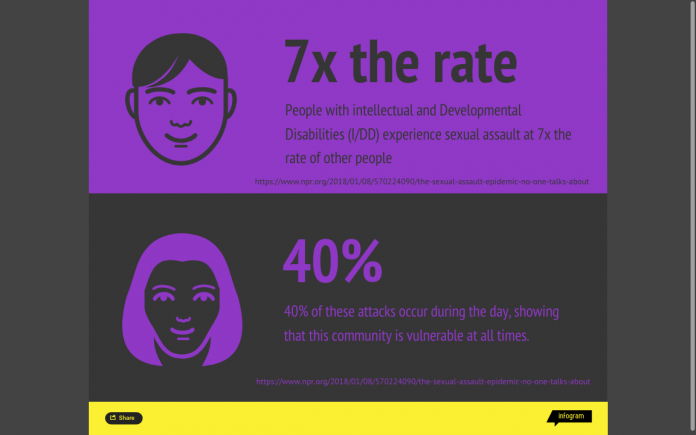 Earlier this year, a series on NPR reported that members of the intellectual and developmental disability community were four times more likely to become victims of sexual assault and domestic violence and were susceptible to experiencing sexual assault at seven times the rate as other people.

After further investigation, it was discovered that it was difficult for organizations like the Arizona Developmental Disabilities Planning Council to find any sort of statistics on members within the I/DD community being abused in the state of Arizona, according to their community relations specialist, Sarah Ruf in an electronic document.

“We invited state experts on sex abuse and sexual exploitation to learn what is currently being done. We found out there is a lot of work to do in Arizona,” wrote Ruf.

Despite the lack of statistics to assist changemakers in Arizona, there are new and disturbing statistics being revealed that detail how underreported these cases are, regardless of the already staggering numbers provided by unreleased documents from the U.S. Department of Health.

Many victims, such as the people of the Rainier School for habilitation of individuals with intellectual and developmental disabilities, are unable to talk or have a difficult time speaking and therefore are unable to report crimes against them.

The reports obtained by NPR also only indicate the rates for sexual assault and domestic violence within private residences, which don’t include individuals in group homes or in institutions, pointed out vice president of advocacy and designated legislative lobbyist for Ability360, April Reed.

“Most cases aren’t being reported in the I/DD community,” said Reed.

She then went on to recite one statistic cited by NPR, that “when asked, the people with intellectual disabilities or a family member or someone else speaking on their behalf, 40% explained that they didn’t think police would or could help and 37% said they handled the assault ‘with another way’.”

As someone who has had a physical disability her whole life, a social worker for the I/DD community, and being the VP of advocacy for Ability360, she said she was very overwhelmed to see these statistics and really felt the weight of it.

Reed believes that the #MeToo movement has given the I/DD community the opportunity to open the conversation in a fresh manner.

Because a lot of the time the abuser is an immediate family member or caregiver to these individuals, often times the victim becomes fearful of losing that person, their independence and in many cases, losing the only person that they can rely on to help them get through their days, according to Reed.

“We teach people stranger danger. But with individuals with intellectual disabilities in particular, stranger abuse is something less than 14% of the time,” said Reed.

According to the NPR report, many members of the I/DD community are taught to be compliant and behave, resulting in an inability to process sexual assault and domestic violence in a manner that other survivors might be able to.

When they are able to speak up and find help, Sarah Ruf of the Arizona Developmental Disabilities Planning Council wrote that “it’s a common theme. Not many agencies track whether or not a reporting victim has a disability.”

State run organizations such as the Arizona Coalition to End Sexual and Domestic Violence are working to engage members of the I/DD community, caregivers and shelters for victims of domestic violence and sexual assault in trainings on how to properly assist this community of survivors, said the ACESDV sexual violence response manager Lindsay Ashworth.

The conversation has only just begun about the “silence and suffering” that has been going on for who knows how long, according to April Reed.

“I’m really hopeful about what change is starting to happen and (…) the awareness of people with disabilities themselves talking about the Me Too movement,” said Reed.

There was a first of its kind in Arizona focus group, focused on individuals with I/DD and sexual and domestic violence held November. It is in collaboration with state departments and advocate groups, including but not limited to, the Arizona Coalition to End Sexual and Domestic Violence, Ability360 and the Arizona Developmental Disabilities Planning Council.

(graphic updated to reflect misinformation in percentage of daytime attacks)