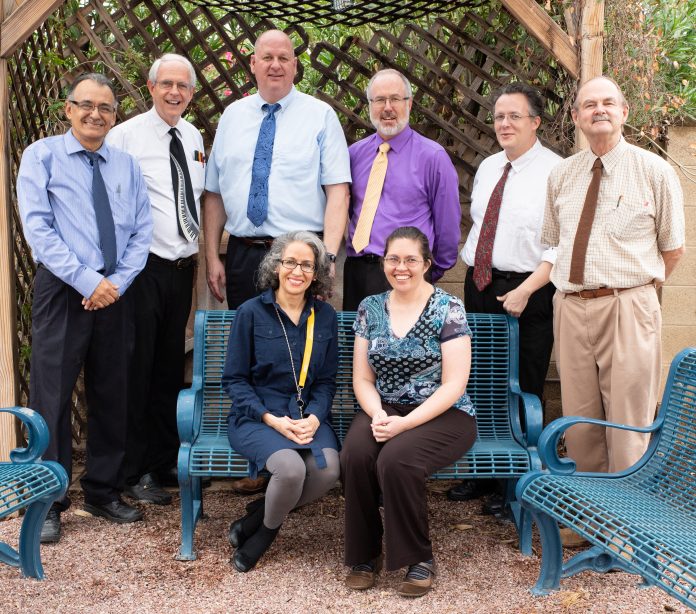 Nine out of Tempe Preparatory Academy’s 38 faculty members have education specialist degrees or doctoral degrees. That’s about 24 percent of the faculty, which is much higher than the average for Arizona (about 7 percent) and the United States as a whole (about 9 percent) according to the National Center for Education Statistics. Having a more elevated degree allows one to see the world from a different perspective. Here are snippets from these nine faculty members’ journeys through their postgraduate education.

Dr. Cardoso, also known as Señor Cardoso, teaches Spanish. He got his PhD in Hispanic-American Literature at Arizona State University. He chose this path specifically because of his love for literature, reading, and analyzing texts. According to Dr. Cardoso, the main advan­tage of doing a PhD is that it allows one to experience new things, acquire more knowl­edge, and interact with many different people and cultures. The most enjoyable parts for him were interacting with classmates and teachers as well as doing research and working on his dissertation. He traveled to both Mexico and Spain and did research on “strategies to write articles and essays in the context of specific political movements in Mexico in the ‘60s and ‘70s.”  He studied civil rights in Mexico and wit­nessed student protests and demonstrations against the government, which was hostile to protests and attacked demonstrators in Mexico City, killing hundreds. Doing a PhD allowed Dr. Cardoso to ex­perience the good and the bad in the world, further enriching his knowledge of the world.

Dr. Evans also completed his degree at Arizona State University. He studied 18th century English literature and even wrote a book on his research titled Samuel Johnson’s “General Nature”; Tradition and Transition in Eighteenth Century Discourse. His dissertation covers the intersection of philosophy and literature in the 18th cen­tury, and he chose to write about Samuel Johnson’s work because he liked the style in which Johnson wrote prose. When asked about the main advantage of doing a PhD, Dr. Evans stated that “it was fun,” especially writing his book and gaining “insight into our English language.” He finds that the most important thing pursuing his degree has taught him is the importance of not just knowing something but feeling like you truly understand it.

Dr. Hickernell, often referred to as Doc, has a PhD in optical sciences, which he completed at the University of Arizona. He states that physics piqued his interest because his brother was also interested in it. He did the research for his dissertation on solar energy. He describes his learning experiences as fun, both in the classroom and outside doing research. He considers learning how to do research one of the most important skills he learned. Doc states that working with all sorts of people and disciplines to accomplish great goals was a great and valuable experience.

Dr. Porter, Tempe Prep’s headmaster, got his degree in Curriculum and Institution with an emphasis in Math Education at Arizona State University. He originally wanted to train math teachers at the university level, which is why he wanted to achieve a more elevated degree. According to Dr. Porter, the level of work to do in order to get through a PhD is more in-depth on a particular subject. “It helped discipline me academically,” he states. He describes the process of researching and writing his dissertation as “intense,” and that it helped him develop academic discipline. He states that his favorite parts of get­ting his degree were the classes specifically related to math education research as well as writing his dissertation. Dr. Porter’s dissertation is on how high stakes tests like AIMS or AzMERIT af­fect teachers who teach mathematics in a classroom. During his research he found that many math teachers feel pressured to teach to the test to maintain their reputation. One of the main questions he covered in his stud­ies is: “Do you teach math how you believe it should be taught?”

Dr. Riesbeck pursued his degree in classics and philosophy at the University of Texas at Austin. He chose this degree because he en­joyed Greek and Latin as well as philosophy. When asked about what he found to be advantageous about doing his degree, Dr. Riesbeck states that it allows one to read a lot and delve deeper into an area than you could if it were just a hobby, and you also get to contribute to that field. He also talked about his job teaching Greek over three summers: five hours a day, five days a week. He describes his students as “great” and said that by the end of the course they were able to read classic Greek poems in their original language. The most important lesson Dr. Riesbeck learned, he explains, is that “there is way more to know, and that is worth knowing, than I will ever be able to know.”

Dr. Salcido studied at Arizona State University School of Justice and pursued a doctor-ate in immigration and domestic violence. “Before this I was working in California at a hospital,” she explains. “I was a case manager at the maternity center.” While working there, Dr. Salcido noticed that many of the women experiencing violence were immigrants, and thus wanted to learn more in order to further her assistance. She enjoyed doing research and collaborating on such a big project as well as working directly with the women and having the resources to do so. “Never give up on your dreams. You can always find a way to reach your goals,” she states. “There will always be individuals who are willing to help you through difficult times.”

Dr. Wallington pursued her doctorate in computational algebraic number theory at Arizona State University. She explained that she “didn’t know what to do with her life” so she “just kept going” with her education. According to Dr. Wallington, “getting to explore what you love” is one of the main advantages alongside more doors being opened up for you as well as higher pay. Pursuing her PhD taught her perseverance. “It’s hard. You just have to keep going.” She worked as a teaching assistant during her studies, and found it to be the most fun part because teaching her own class “made me feel really smart,” which she explains was balanced out by the classes she had to attend herself, which prevented her from feeling too cocky.

Dr. Wolfe is a Doctor in Musical Arts (DMA), more specifically in Piano, Perfor-mance, Pedagogy, and Literature; Process of Group Environments. He studied at the University of Colorado at Boulder. He partly chose his degree because the professor teaching it was great, but also to solve a problem: how to insist on high musical standards and also take good care of your musicians. Oftentimes, he explains, music leaders sacrifice the self-esteem and well-being of their musicians in favor of high standards, while others relax their standards too much in order to be “kind” to those they lead. Dr. Wolfe states that he learned so much in the program and still uses the knowledge he learned in every class and every lesson. The most enjoyable part of doing his degree was “learning how music group dynamics and gestalt combine to create a wonderful learning environment.”