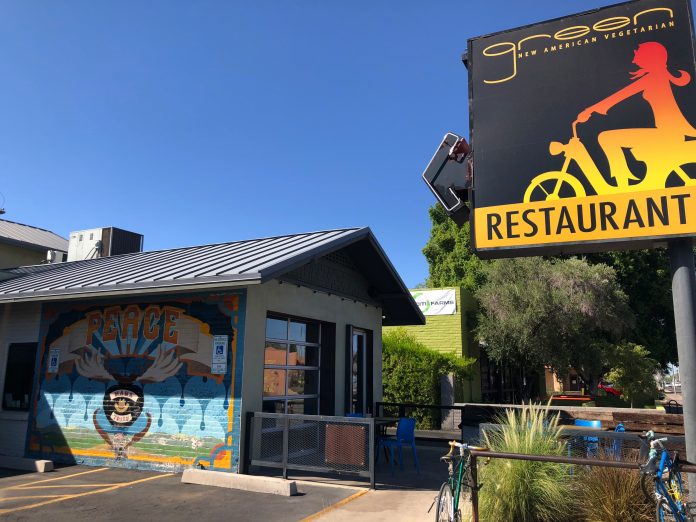 Vegan living is one of the largest growing consumer markets and should be capitalized on, according to an article from Forbes. Downtown Phoenix vegan restaurants Green New American Vegetarian and Nami are benefitting because of the trend and a greater awareness of veganism.

When Green first opened its doors, veganism was still a relatively unfamiliar concept according to the general manager of Green, Stacey Newlon.

“Back then, vegan wasn’t a very well-known word and with those that did know it, it wasn’t very popular,” said Newlon. “That’s why it’s Green New American Vegetarian. It’s more palatable for the common populace.”

Vegan customers will go to Green expecting to tweak the menu a bit to accommodate their vegan diet. However, Green ensures that all of their menu items are completely vegan, despite ‘vegetarian’ being in their name.

Green noticed a distinct increase in business during what would normally be considered their slow season after the media played in the vegan communities benefit.

“Last summer (2017), What the Health became available on Netflix and we got super busy and it continued throughout that year,” said Newlon of when she noticed significant business growth within recent years.

As veganism becomes more prevalent in society, social media has allowed for a larger conversation to be had about plant-based eating.

“Right now, ‘vegan’ is a huge buzzword. It’s how a lot of people are identifying now and it’s a word that a lot of people at least know,” said Green employee Landrie Einardt who has been a vegan for two years. “We have no typical customer […] but I have noticed a lot more younger people coming in. I think that’s because of social media and younger people seem to be more in tune with what’s going on.”

According to research from GlobalData, in the past three years there has been a 600% increase in people identifying as vegans in the U.S.. Not only is the media and celebrity influence affecting the growth in veganism, but there is also a growing consciousness in the more serious ramifications of non-plant-based diets.

“I’ve noticed that consumers are more interested now more than ever in where their food comes from and the implications of their food choices,” said Marissa Podell, a Los Angeles-based dietician specializing in plant-based nutrition.

“Whether it be because of the correlation between plant-based eating and chronic disease prevention, the benefits it has on the environment or to reduce animal suffering, people are choosing to become vegan for much more personal reasons.”

The growth in the vegan community in downtown Phoenix has given more opportunities for these local vegan restaurants to explore new business opportunities and audiences. According to Newlon, there are vegan and vegetarian festivals happening all across the Valley nearly every month. She said these events are only something that has come to fruition within the past 4 years.

Even big name events are looking for vegan vendors specifically because attendees ask whether or not it will be an option available to them.

“Within the past six months I’ve noticed we’ve been contacted more by mainstream events like the Arizona Taco Festival and a donut festival,” said Newlon.