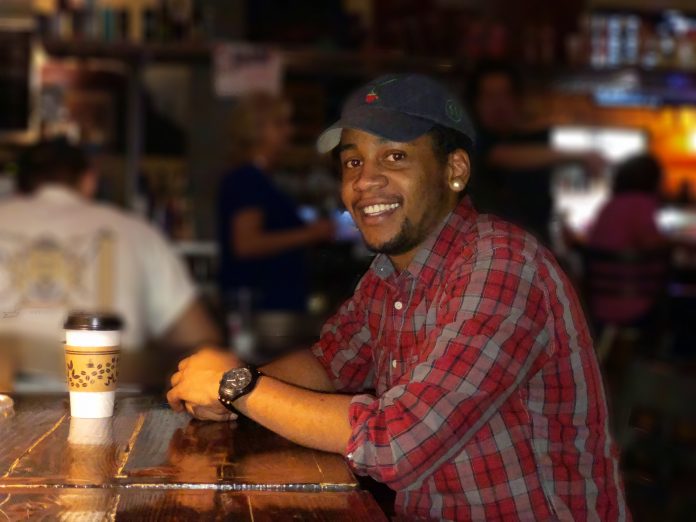 To be raised in a single parent household by a teen parent would be difficult enough for any child. To become the oldest and only male role model for younger loved ones would force that same child to grow up so much faster. But this was just the upbringing of Dominique Flagg; otherwise known by the community as Dom Root. He is the owner of the only events and productions company based out of Phoenix that is specifically branded to support local, underground and emerging artists called I AM ROOT.

“Growing up, we didn’t necessarily have great male role models. […] On my father’s side, I’m the only male grandchild, so I have a long list of little cousins that are young women. I wanted to be someone for them to look up to,” Flagg said of his early inspirations for his life’s mantra that would later become his business name, I AM ROOT.

“These people showed up for me all throughout my life, so who would I be to not continue to encourage myself.”

I AM ROOT stands for Inspiring All of Mankind by Restoring Often Omitted Traditions, but started as a mantra for a 16-year-old Flagg who needed a way hold himself accountable for his decisions and where he goes in life.

“Like a root to a tree, everything goes to that foundation system in order for that tree to grow,” Flagg said, using the metaphor to identify with his early personal philosophy. “Plant a seed, it sprouts, you take care of it, and things happen from there. It was meant to tether me to take action in the moment that I want something.”

Flagg, now 26-years-old, grew up in Inglewood, CA in a structured home lead by his young mother and supported by his Auntie Nia and grandmother on his father’s side. While Flagg lacked an immediate father figure, he felt compensated with the support that he found in his matriarchal household.

Eventually, he found a male role model in a former boyfriend of his aunt’s whom he calls Uncle Joe. He taught Flagg how to fight, went to all of his football games and explained the meanings behind Tupac’s song lyrics to him.

“His main thing was getting me to make my own decisions […] to be sure to do my own research and pay attention to what kind of information [I am] consuming,” he said recollecting his time spent with his Uncle Joe. “He’s probably why I took an interest in education and learning […] which helped me to fuse real life with art.”

Despite his ability to see past the limitations of his single parent household, there still was the conscious realization of local gang activity in his immediate community and the not uncommon struggle of being broke as an inner city youth. Regardless, Flagg was determined to persevere for himself and those around him.

However, he knew that if he wanted something to happen for himself in life, he couldn’t rely on anyone else to make it happen for him.

At 18-years-old, one month after graduating high school, Flagg packed up and moved his life to Tempe, AZ where he studied English, creative writing and philosophy at Arizona State University. He brought his dreams of college into fruition.

In 2011, while in his sophomore year of college, he decided to launch his long-talked-about goal of owning his own business, I AM ROOT. It began as an apparel brand, then a lifestyle brand and has since expanded to include events, an artist collective, audio and video productions, photography, advertisement and music production.

“He’s driven, not easily influenced by the opinions of others,” said the events coordinator for I AM ROOT, Carissa Jackson. “He’s a visionary.”

But no matter how far his influence reaches and how many people he inspires through his work, his family remains the foundation, the root, of all of his successes.

“A lot of people look up to Domo. He has so much influence on the people around him, including his cousins, […] his mother […] and even me,’” said Kristi Sprowl, Flagg’s best friend of the past 10 years. “He has so many people in his life that are counting on him.”

Within the next year, Flagg’s goal is to enhance the quality of his events through more attention to the sensory details and ambiance of his events and hopes to one day expand the business to other major cities to create a larger impact.

“The message I want people to walk away with would be positivity; to feel that they can do accomplish whatever it is they want to do. They should be inspired through the work that I put out,” said Flagg