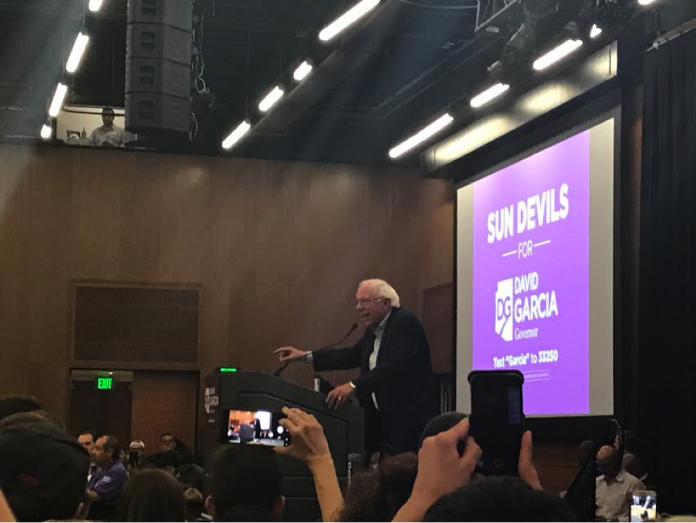 The crowd showed great energy as they cheered and held up purple “Sun Devils for David Garcia” signs. Security guards estimated there were approximately 1,100 people in the room.

Garcia’s campaign rally was hosted by ASU Young Democrats and featured various speakers, including U.S. Senator and former presidential candidate Bernie Sanders. Sanders spoke about the importance of having equality in the U.S.

“This country has struggled for too many years with discrimination,” he said. “We are not going backwards, we are going forward.”

Sanders heavily criticized President Donald Trump for actions such as sexism, “demonizing” immigrants and failing to provide health care for everyone. He said health care should be a right, not a privilege.

“We pay the highest prices in the world for prescription drugs and one out of five Americans can’t even afford the medication doctors prescribe,” he said. “At the end of all that, we end up spending twice as much per person on healthcare as do the people of any other nation.”

A handful of conservatives attended the rally and shared their thoughts on what was said.

Garcia, an ASU alumni and professor, described higher education as the future and referenced the state constitution saying universities should be as close to free as possible.

“When I’m governor, I’m going to fight for that constitutional requirement to make our universities as nearly free as possible,” he said.

Regarding teacher salaries and the #RedforEd movement in which teachers fought for higher pay raises, Garcia promised teachers they would be treated like professionals when he becomes governor.

“We’ve had teachers take two or three jobs to stay in the classroom and we’re going to say ‘no more’ to that,” he said.

The crowd cheered as the Democratic candidate spoke about the changes he had in mind for the future.

After the rally, Deedra Abboud, a member of the audience said, “David Garcia has not only been endorsed by Bernie Sanders but by Hilary Clinton and Barack Obama. As Democrats, that should be a unifying factor.”

Garcia also spoke of joining the Army at 17 years old and how that experience taught him to be tough. He said that he served his country while Gov. Doug Ducey served ice cream as the CEO of Cold Stone Creamery.

“We have a CEO governor right now. A working class governor is what we need,” said Garcia as he finished his speech.