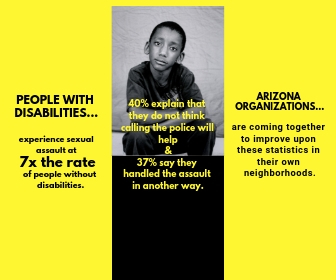 According to an NPR report released earlier this year, the intellectual and developmental disabilities community is four times more likely to become victims of sexual assault and domestic violence. Since this discovery, Arizona organizations including Ability360 and the Arizona Coalition to End Sexual and Domestic Violence that focus on advocating for and supporting this community and individuals who have survived sexual and domestic violence have held discussions regarding how to create a solution to end this abuse.

Within the month of November, there were two roundtable discussions hosted by the Arizona Developmental Disabilities Planning Council focused on sexual abuse and exploitation of the intellectual and developmental disability community. According to a blog post on the ADDPC website, “the roundtables intend to pull together agencies and stakeholders to discuss current research, best practices, and where we are as a state in identifying, monitoring, and training around this issue.”

The roundtables have included both state departments and advocacy groups such as The Arc of Arizona, the Division of Adult and Aging Services – Adult Protective Services amongst others.

“There’s virtually no data collected as of right now that is Arizona specific,” said Sarah Ruf, the community relations specialist for ADDPC. “We’re focusing on pulling together our different efforts within our different agencies so that we can start tracking and even commission a study that would find what the scope of the problem of abuse and sexual assault among people with disabilities in Arizona is.”

The last meeting focused on sharing each organizations resources, identifying what is currently being done and the gaps in such efforts. According to Ruf, the group agrees that the first step to any sort of solution would be to collect data specific to Arizona residents that are most likely to be affected. However, the group will not make any formal decisions on what they will do moving forward until their next meeting on December 10, 2018.

According to Lindsay Ashworth of the Arizona Coalition to End Sexual and Domestic Violence, the coalition has provided some contacts for researchers that they have worked with in the past including the Vera Institute; a national nonprofit that conducts research and works closely with the government to improve upon our justice system.

In June 2018, the Vera Institute released “A Blueprint for Change: Toward a National Strategy to End Sexual Abuse of Children with Disabilities” that used data collected since 2012 to help create a solution towards this problem.

Erica McFadden, the executive director of ADDPC, said that as of right now, the organizations involved in these roundtables are gathering information on what kind of information they need as of right now to start moving forward and making Arizona better when it comes to identification, monitoring and prevention.

“We’re trying to put together a request for proposals to do research and potentially trainings,” McFadden said. “We’re going to be funding $100,000 this first year.”

Of the organizations, Ability360 is an Arizona nonprofit that focuses on empowering people with disabilities to achieve independence. April Reed, vice president of advocacy and designated legislative lobbyist for Ability360, said “there’s good collaboration set forth for people to have access to counselors for support and resources.”

According to Reed, they hope to announce these service and begin offering them in February. “Our first roundtable was to explore (the organization’s) perspectives on sexual and domestic violence and how to prevent it,” Reed said.

“There’s a recognition I’ve never seen before, especially with the #MeToo movement. It’s exciting and I’m hopeful in the progress that’s been made this year since the NPR report.”