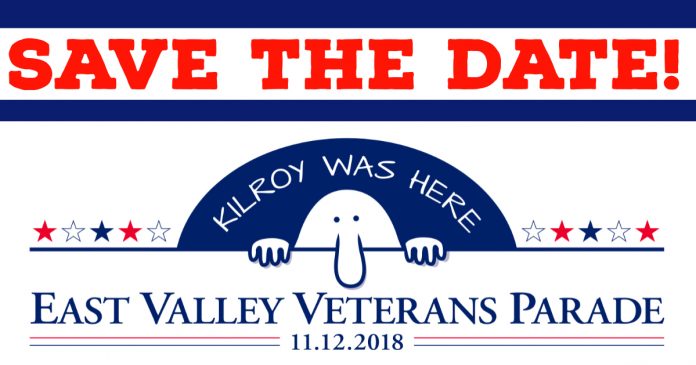 Join our East Valley community in celebrating the service of veterans, active military and their families at the 2018 East Valley Veterans Parade on Monday, November 12. The celebration starts at 10:30 a.m. in Downtown Mesa. The official parade kick-off is at 11 a.m. at the intersection of University Drive and Center.

This year, the parade will highlight “Kilroy,” a bald gentleman with a large nose peering over the top of a wall. Usually found next to the phrase, “Kilroy Was Here,” this image is synonymous with the service, dedication and commitment of U.S. Armed Forces.

Kilroy is possibly the first viral meme, long before there was even such a thing as social media. In every combat, training or occupation operation during WWII and the Korean War, Kilroy always arrived first and left last. His simple outline caught the imagination of GIs wherever they went.

GIs began tagging the places they visited in war theaters in Europe, Asia and Africa. They attached the character drawing with the saying sometime early in the war, probably based on a popular English cartoon. Every imaginable surface became an opportunity to draw this simple cartoon and it quickly became a competition to place Kilroy in the most unusual places, including top-secret military installations, bases and battlefields. The original cartoons were drawn with whatever could be found at hand, from chalk to pencil to pen, and provided encouragement and comfort to embattled soldiers.

Kilroy is etched in stone in two places near the Pennsylvania pillar of the WWII Memorial in Washington, D.C. reminding veterans that Kilroy is still with GIs when they are in harm’s way.

Lester “Les” Gray, Jr. will serve as the parade’s 2018 Grand Marshal. He was selected for his outstanding military service in World War II and in the Korean War. Gray is the proud recipient of two Distinguished Flying Crosses and five Air Medals. He is joined in the parade by service marshals:

·     Army — Loyd Boyd, who served at Ft. Huachuca during World War II, in an era where he faced issues of segregation in the military, as well as in his hometown neighborhood in Mesa.

·     Navy — Carey Slade, who served as a Builder Second Class in the Navy Seabees.  She is the Commander of DAV-East Valley Chapter 8.

·     Marines — Gary Rood, a Vietnam Vet and Silver Star recipient for bravery resulting from his actions in Operation Utah in 1966.

·     Coast Guard — Wes Burns, a member of the Coast Guard for 20 years, still currently in the reserves.

This year’s parade also will honor Adolfo Celaya, a Florence, Ariz. native who survived the sinking of the Indianapolis in the Philippine Sea in World War II. It took just 12 minutes for the Indianapolis to sink completely. With no life jacket and very few life rafts, Celaya hung on through several cold nights and fiercely hot days before being rescued. He could only sleep if someone else kept him above the surface to prevent him from ingesting sea water. In all, 3 out of 4 sailors on board the Indianapolis died. He is one of just 317 survivors.

The parade, which draws thousands of parade goers is supported by:

Special thanks also go to the City of Mesa for their ongoing support.