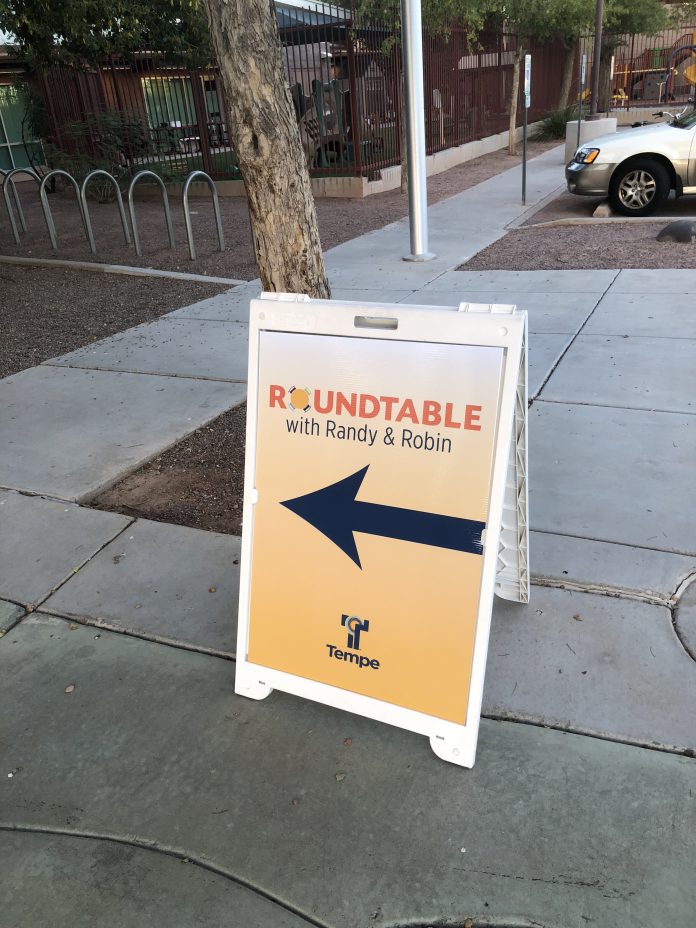 Tonight, City Councilmembers Randy Keating and Robin Arredondo-Savage spoke to concerned Tempe residents regarding the homelessness issues and what is being done internally to improve safety and outreach within the community.

Maricopa County has faced a 60% increase in homeless people in the last two years, according to Kim Van Proyen, Tempe’s Homeless and Fair Housing Coordinator.

“I don’t think anyone on city council would disagree that homelessness is currently the biggest challenge Tempe is facing,” Keating said.

Suzanne Orarke, a Tempe resident in attendance, is worried about her 8-year-old son getting to school safely while riding his bike through the park, and experiencing any strange encounters with homeless people along the way.

“I don’t want to be a helicopter parent, but at the same time, I also don’t want to lose my child to something stupid,” Orarke said.

Majority of the residents voiced similar concerns regarding homelessness in the community, specifically camping out at parks overnight, and drug usage.

“We have to recognize that sleeping is a basic human right, even when it comes to our parks. If the shelters don’t have space, the person still needs somewhere to sleep. With that being said, the homeless will still have a curfew enforced and will be held accountable for their actions,” Sylvia Moir, chief of police, said.

Although there has been significant growth in homeless people within Tempe, and the country as a whole, councilmembers Keating and Arredondo-Savage reassured the public they are doing everything in their power to keep up with the rising population, while being sensitive and strict with transients.

“I have been on several working groups discussing this issue about getting them jobs and getting them housing. Right now I can tell you that the city manager is working with other city managers throughout the Valley to come up with a comprehensive housing plan for the homeless,” Keating said.

Along with concerns about homeless, are worries about how police officers are currently treating the calls received regarding homeless people in neighborhoods. After Steve Geiogamah, a Tempe resident, called the non-emergency line, he was disappointed in how serious his call was taken by the dispatcher and police officers.

“Later the next morning, I saw nothing done. I called dispatch again and they said they could not send an officer even though I was concerned about the issue taking place,” Geiogamah said.

Moir addressed that it is important for the police officers to take all calls with the upmost respect and to engage with the homeless people, rather than the current alternative which is to drive by slowly, to let them know they are watching and aware of their presence.

Instead of this passive approach, Moir wants to enforce more interaction between the homeless and officers, especially about where and how to get them help.

“We have been able to house 100 people in this last year. And that is people that have been homeless for many years here in the city. We need to find services to fund this outreach. We are successful, but it is difficult to keep up with the numbers of people that are falling into homelessness,” Van Proyen said, in regards to the Homeless Outreach Program Effort (H.O.P.E) she represents in Tempe.

“We all know that homelessness is not a crime. If there are behaviors that you observe, that rise to the level where you need a police officer, call the non-emergency number. Or, if it’s immediate or a real serious issue, call 911. Describe the person and request an officer. The expectation is that we trace the call, enter the call and that an officer responds,” Moir said.

For calls regarding homeless issues, or any city-wide situations, the following phone numbers can be used.