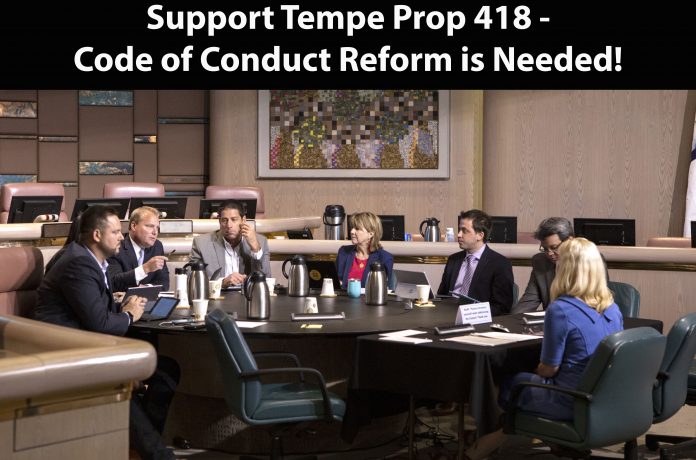 After being vociferously and publicly opposed by then Councilmember Elect Jennifer Adams, the Tempe City Council majority voted to put the Code of Conduct reform, in the form of Proposition No.  418 (Prop 418), on the November 6th ballot (Tempe Election Information). If Prop 418 is approved by the Tempe voters, it shall have the effect of amending the Tempe City Charter, to authorize the City Council to remove a Councilmember for unlawful conduct.  More specifically it will permit the city council to remove a council member if there is clear and convincing evidence of unlawful conduct by a council member involving actions including, but not limited to, corruption, sexual abuse, violence and other such illegal actions.

The power for elected bodies to remove members for such illegal misconduct, is already in effect for statewide and national public offices up to and including the President of the United States. While this power is rarely used, when the situation has warranted it, public officials have been removed from office, or have resigned from public office when faced by such proceedings.  Removal from public office, or impeachment as it is sometimes called, is purely a civil matter and is completely separate from criminal proceedings. As the Tempe City Attorney Judi Baumann made clear, any decision to remove in the future would be appealable to the Maricopa County Superior Court System (Arizona Republic, June 29, 2018). Checks and balances are kept intact by Tempe Prop 418.

As Councilman Randy Keating stated, with the support of the entire city council, this reform is not about re-litigating the past. This past includes the well-publicized actions that Councilman Granville was responsible for.

Contrary to the sensationalized hyperbole of Mr. Granville’s supporters, who decry this reform as a “witch hunt” or “lynching”, there has never been recorded incident in Arizona history where a removed public official was subsequently executed by the hanging noose, or removed based on witch craft. These claims are beyond absurd.

In order to understand how the future removal power by the city council could be used, it is highly beneficial to evaluate the national and statewide examples of this power being used. Without question, history is the best teacher.

On presidential level, the constitutional power of impeachment was used by members of Congress to advise the disgraced former President Richard Nixon to resign for his illegal actions related to the Watergate case. They further advised Mr. Nixon that if he did not resign, Congress had enough votes to impeach him. Mr. Nixon resigned. Mr. Nixon was subsequently pardoned by Vice President Gerald Ford, so he never faced criminal proceedings on this matter.

On an Arizona state level, in 1988 former Governor Evan Mecham was impeached for obstruction of justice and misusing public funds (Arizona Daily Star, February 8, 2016). After being impeached, Mr. Mecham faced criminal charges, and he was found not guilty on all of them (New York Times, June 16, 1988). Mr. Mecham went on to run for Governor again, as well as U.S. Senator and U.S. President, but he was never elected for public office again.

In 2011, Sen. Scott Bundgaard was involving with a physical altercation with his then girlfriend on the side of the Piestewa Highway (New Times, March 2, 2011, includes police report link).  Mr. Bundgaard initially said he was attacked, but then he pleaded no contest to a misdemeanor endangerment charge stemming from the incident (New Times, August 16, 2011). When the Arizona State Senate held an ethics hearing, rather than testify, Mr. Bundgaard resigned (New Times, January 6, 2012).

These three well publicized cases clearly illustrate how the power to remove elected public officials for misconduct function. Between Nixon, Mecham and Bundgaard the main thing they had in common, is they were not worthy of the offices they were elected to. They were appropriately removed, or forced out, and our nation and state were a better place for it.

Tempe Prop 418 is Right for our Future

It is no secret that after former Tempe Preparatory Academy (Tempe Prep) students complained about then Tempe Prep teacher and Tempe Councilman Kolby Granville’s alleged deviant actions, including providing minors with alcohol and sexual abuse, Tempe Prep summarily fired Mr. Granville (Arizona Republic, January 18, 2018). As deviant as Councilman Granville’s actions might have been, the Tempe City Council is committed to not re-litigating this issue, and this writer completely supports that just principle.

The Prop 418 Code of Conduct reform issue is about the future, and not the past. If in the future the Tempe City Council sees clear and convincing evidence, that a member of the council is acting like disgraced publicly elected officials such as former President Richard Nixon, Governor Evan Mecham and Sen. Scott Bundgaard, the Tempe City Council should not only have the ability to remove such individuals, they would also have the civic obligation.

In the future, our Tempe democracy is too important to have public officials who commit such disgraceful actions serve on our City Council. We are better than that. For these reasons, many Tempe citizens will support Tempe Prop 418, and we are urging others to do the same.