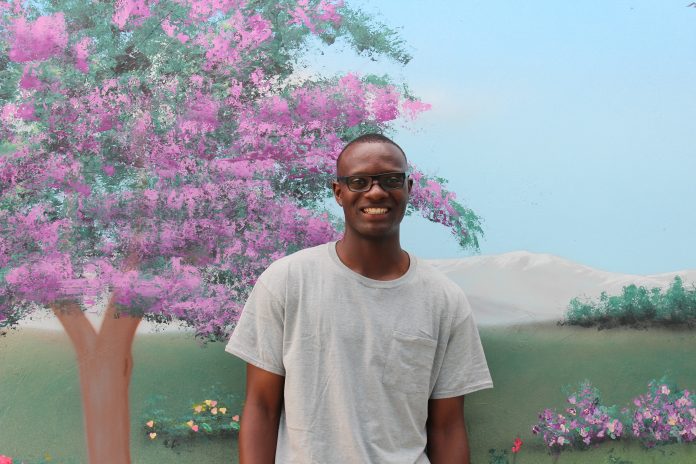 Around three years ago, David Williams decided to give basketball a try. Previously he had tried other sports and competed in Special Olympic events including bowling, bocce ball, golf and softball, but did not care for most of them. David enjoyed playing softball, but felt he was not very good, and even though he likes to play golf occasionally, David found he does not like to play it competitively. David really enjoyed basketball and decided to join the VALLEYLIFE Vipers Special Olympics Basketball team. That first year, David won a gold medal. The next year, he transferred to a day program at another organization, but continued to play Special Olympics Basketball in the new program. He has since won two more gold medals.

David really enjoys showing off his basketball skills. He believes much of his ability comes naturally but admits he does put a lot of time into practicing, running and working out. Many people have told David that he plays like James Harden, Shooting Guard/Point Guard for the Houston Rockets. David makes sure to practice and work out every Saturday and a few other times during the week. He also takes time to rest and catch up on watching NBA games. By far, his favorite team to follow is the Phoenix Suns. There are two NBA players that David looks to for inspiration. Someday David would like to meet and get some advice about playing from LeBron James, Small Forward for the Cleveland Cavaliers. He has also always followed and looked up to Kevin Durant, Small Forward for the Golden State Warriors.

All David’s practice and natural talent have earned him a place on Team AZ. He competed against around 100 other athletes to secure his place on the team. David can play all the positions because of his superior ball handling skills, but he mainly plays Small Forward, Power Forward or Shooting Guard. He is very excited to be part of Team AZ and looks forward to the team’s upcoming events.

This summer David will travel with Team AZ to complete in the 2018 Special Olympics USA Games in Seattle, Washington. David has never been to Washington and the trip to the USA Games will be his first time on an airplane. He was born and raised in Arizona and has only left the state to go on trips to California with his day program. Then next March, David is scheduled to travel to Abu Dhabi to play basketball in the 2019 Special Olympics World Summer Games. These will be the first Special Olympics World Games held in the Middle East and it is estimated that 7,000 athletes will compete in 24 sports over seven days. Abu Dhabi will be providing 20,000 volunteers and expects up to 500,000 spectators for the events.

Besides his basketball skills, joining the Special Olympics team has also helped David build his socialization skills. In the past, he had trouble socializing. Being a part of the team and working in a group environment out in the community have really helped David reach his goals of being more open. These activities have provided a lot of practice for developing his social skills. Meeting David now, it is hard to imagine his struggles as he is very open and eager to talk about his achievements.

In his free time David enjoys watching NFL games. His favorite NFL team is the Arizona Cardinals. He also enjoys watching baseball and hockey. David’s other interests include the culinary arts and he enjoys trying new types of foods whenever he has the chance.

If you would like to donate to help David and his team train, travel and compete please go to https://www.classy.org/team/128646 to support the Adult Unified Basketball team. This page is currently raising money for the Seattle 2018 Special Olympics USA Games. Once the funds needed for the USA Games are reached, this page will be updated to raise funds for the 2019 Special Olympics World Summer Games.

When you reach the site, you will click the donate button. On the next page you will select your amount and click the checkbox underneath your donation amount that states “Dedicate my donation in honor or in memory of someone.” Choose the “in honor of….” selection and type “David Williams” in the Honoree’s Name boxes.  Enter the remaining required information to complete the transaction and click the “Give Now” button at the bottom of the page.

David became a Member of VALLEYLIFE in 2014 when he joined both Day and Vocational Services. David started working in VALLEYLIFE’s Group Supported Employment program performing pool and landscaping services when he first joined VALLEYLIFE’s Vocational program. Later, when pool and landscaping services were discontinued, David moved to the janitorial services program and has worked there ever since.

VALLEYLIFE is a nonprofit organization that offers group homes, daytime activity centers, vocational programs, and home and community based services to individuals with disabilities throughout the Phoenix metro area. For over 70 years, VALLEYLIFE has been helping people with disabilities by enabling them to live a life with choices, independence and dignity. VALLEYLIFE also operates a full service commercial printing company, Williams Express Document & Print Services.