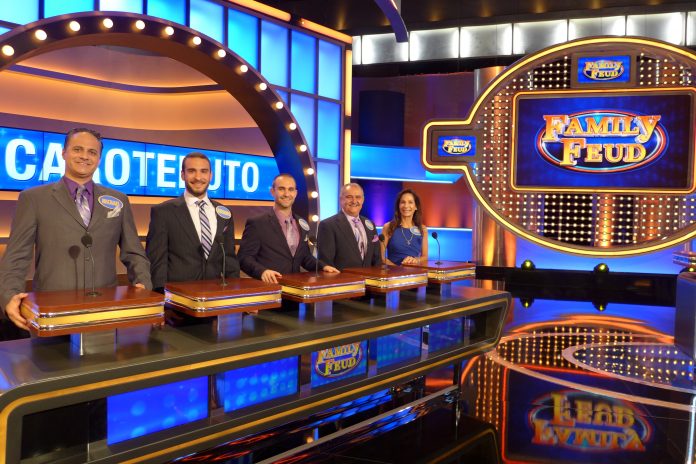 PHOENIX — Another Phoenix-area family will get its time on the TV screen when their appearance on the Steve Harvey-hosted game show “Family Feud” premieres on Wednesday night, February 28th, at 7pm on the NEW CHANNEL 7!

“Family Feud,” the long-running game show, pits two families against each other to battle it out by naming the most popular answers to various survey questions in order to win cash and other prizes.

The Carotenuto family — made up of 60-year-old Rica, 60-year-old Pasquale, 29-year-old Giuseppe, 25-year-old Alessandro and 41-year-old Michael — will get its opportunity to win some cash on the most popular Game Show on Television.

Both Rica and Pasquale are the owners of Ristorante Giuseppe in Scottsdale. Giuseppe is a doctor, Alessandro is a medical student and Michael is a sportscaster.

The family was one of four chosen after “Family Feud” held live auditions at the Phoenix Convention Center back in 2015, in conjunction with The NEW CHANNEL 7.

In a press release, the family said the best part of being on “Family Feud” was watching first-hand how a television show is made, as well as getting the opportunity to bond with each other.

The Allens were originally from Denver, Colorado but moved to Arizona in 2001 after Marilyn survived triple bypass heart surgery and could not deal with Colorado winters anymore. Their ages range from 23 to 75 years old.

Brian and Julian are both graduates from Arizona State University and Tre is a graduate of Grand Canyon University. Brian is a real estate project manager, Julian is a Hollywood publicist and Tre is the lead teller at Wells Fargo and is also in the Delayed Enlistment Program for the Air Force.

Katherine is the vice president of Bank of America’s Mortgage Operations and has been an employee with the company for 21 years.

Marilyn is a retired special education teacher who volunteers three days a week at the senior center in Surprise.

The Allen’s were the third Arizona family to be featured on the show.

Last year, the McDonald and Montijo families both competed on the show.

Click here to find out more about Family Feud on AZTV7, and for updates on the next Contestant search coming to Phoenix!   https://www.aztv.com/familyfeud